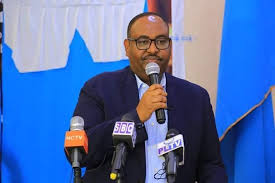 Puntland leader Saeed Abdullahi Deni announced his candidacy on Saturday for an upcoming presidential election scheduled to be held in Somalia’s capital, in an apparent challenge against his rival, the country’s incumbent President Mohamed Abdullahi Farmajo.

The leader of Somalia’s northeastern semi-autonomous region held meeting with MPs elected in his region on Saturday after which he officially announced his plans to run for Somalia’s President following months-long speculations about his bid for the top office.

He is not the only candidate running against Farmajo in the upcoming election. However, former presidents, ex-Premier and other well-known politicians are among the aspirants, who have long been criticizing government’s failure to conclude corruption-marred, long-delayed polls on a self-established deadline.

On Friday, Puntland Interior Minister Mohamed Abdirahman Dhaban’ad urged Somalis to rally their support behind Deni’s candidacy, heaping praise on his boss for achievements he had ensured during his tenure in regional presidency.

“Somalis should invite President Deni to his ambition to go to Villa Somalia [Somalia’s presidential palace],” he said on Friday, speaking at a ceremony marking the conclusion of parliamentary polls by the regional administration.

“It is well known what he has done in Puntland during his term in the office such as democracy and security.”

Deni enjoys an unquestioned support by Jubaland administration, whose leader has long been at loggerheads with Somalia’s incumbent President Mohamed Abdullahi Farmajo. But it is yet unclear if he could win the backing of other regional leaders.

Former Somali Minister of Foreign Affairs Mohamed Abdirizak, who also comes from Puntland, announced that he was running for Somalia’s president in the upcoming election, citing the current administration’s “dictatorial” rule as an incentive for his decision.

Puntland has become the third regional adminstration to conclude parliamentary polls after Southwest and Galmudug authorities earlier filled their share of seats while Hirshabelle and Jubaland have yet to complete the process, with only a few days to go before another deadline set by the election body.