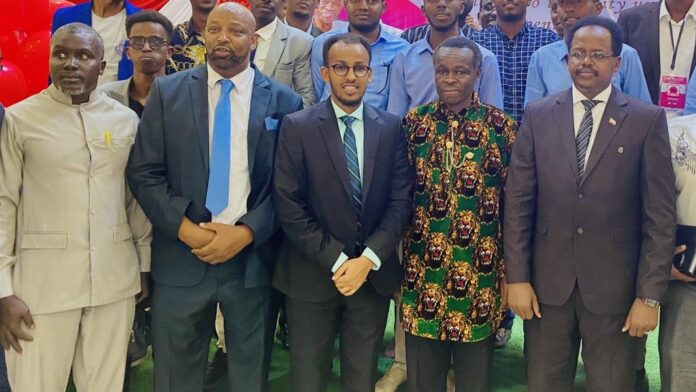 A well-organized ceremony was held today in Hargeisa to launch Unity University. Notable figures including ministers, political parties representatives, law makers, intellectuals and other members of the public have attended the inauguration event. The Praising remarks and future expectations of the university were among the main focus of the guest speakers. According to the management of the new campus, the programs will be conducted purely in English as the language of instruction. The Unity University which is partnering with the PLO Lumumba foundation is expected to become a world class university in leadership development in Somaliland and beyond with high standard academic studies. In his remarks, the deputy minister of education Abdihakim Said Muse expressed gratitude to those who initiated the University while promising the establishment of strong corporations with the management of the University. The deputy minister also advised the aspiring university students to take advantage of this opportunity. Mohamed Ibrahim, a senior officer of the PLO Lumumba Foundation revealed that Somaliland is the 39th African country they decided to operate in terms of education sector and humanitarian activities. Mohamoud Rageh, the executive Director of Somaliland National Printing agency, glorified Lumumba’s contribution to the development in Africa. He also advised him to proceed with his powerful and inspiring speeches. The interim chairman of Waddani party, Abdiqadir Jirde underscored that Lumumba is one of the greatest African scholars who loves their continent and asked other African intellectuals to follow suit. Meanwhile Professor Patrick Lumumba, the founder of the PLO Lumumba Foundation stated that African intellectuals and leaders must do something to prevent the continent from being a market of foreign ideas. In his remarks at the opening ceremony, he said Somaliland is a great example and other African countries must learn something from it. The Unity University is expected to add much value to the country’s education system in the following years. It has already offered 500 scholarships to the people of Somaliland including Army officers and other members of the public.