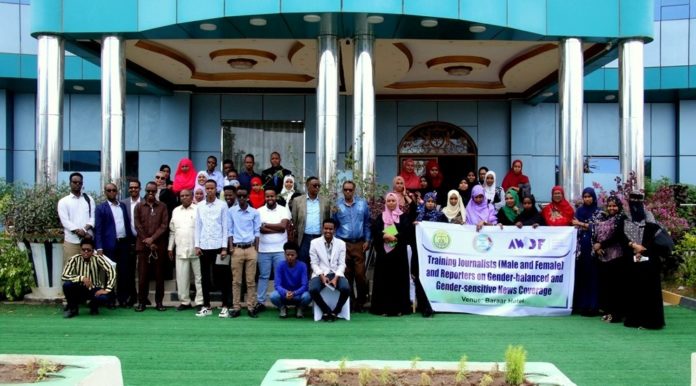 Hargeisa -Nagaad Women’s Umbrella holds training for journalists from the various media organizations in Somaliland on how to work closely with the media and disseminate information on women’s political participation in the upcoming elections.

The three days training which commenced on the last Thursday (02 July 2020), concluded on Sunday (5/07/2020), among those attending the closing ceremony were representatives of Nagaad Network, parliamentarians, the managing director of Somaliland National Television (SLNTV) and other dignitaries.

Speaking at the closing ceremony journalists who took part in the training said that during the course of the three-days training period, they learned more about women’s rights and the importance of women representation in the parliament and local government. The journalists also pledged to increase awareness and coverage in their programs by advocating for more women representation in politics.

They also noted that during their training they have acquired sufficient knowledge and information on how to encourage women who aim to contest for seats in upcoming parliamentary and local government elections. The journalists thanked Nagaad for availing them the opportunities to raise awareness of gender equality among members of the media, including through the training, so they can begin to practice gender-sensitive reporting.

Ms. Aniisa Yusuf Mohamed, the executive director of Nagaad Women’s Umbrella speaking during the ceremony said women in Somaliland should be ready to receive the rights granted to them by the Islamic religion and to compete in whatever roles and responsibilities that Islamic law permits.

She added that women can work in government or private offices and at the same time manage our daily house chores needs and skills of the work may have the knowledge, they said; “We have a greater capacity than men that God has given us. Thanks to God we can manage all of this.”

Mr. Mohamed Hassan Ali (Weji) the managing director of Somaliland National Television (SLNTV), said that women have a huge role in society and contribute positively to the development of various sectors in the Republic of Somaliland, urging women to take the lead and have confidence in their femininity, demonstrate their ability to collaborate and thrive.

Mr. Ibrahim Mahdi Buba is a member of the House of Representatives and the Secretary of the House of Representatives, Mr.  Abdirisaq Said Ayanle, who gave the speech at the event, thanked the Nagaad umbrella organization for training the journalists on the role of women in politics. They urged the journalists to apply the skills they learned to their work, on their part, they pledged to work to facilitate and accelerate the adoption of any women quotas bill.

“We all agree on the importance of mothers and the role of women in society in their knowledge and experience, capacity, and we are here to advocate for your rights”, said Mr. Ibrahim Mahdi Buuba.