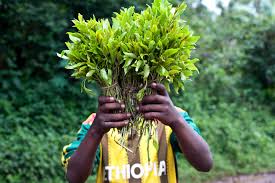 Miraa traders in the country are up in arms after Somalia turned back an aircraft transporting 13.6 tonnes of khat to Hargeisa, the capital of the breakaway Somaliland region.

Nyambene Miraa Traders Association (Nyamita) Chairman Kimathi Munjuri said the plane was turned back on Saturday, despite having been cleared to make the trip.

Mr Munjuri said the traders would lose Sh8 million if the khat is not delivered on time.

“The miraa is valued at about Sh3 million, Sh2.5 million goes to transport and there are other logistical costs which cannot be refunded. We had approvals from the Somaliland Civil Aviation Authority and everything was going on well, until the aircraft entered Somalia’s airspace. The pilot was told that he was carrying illegal cargo,” Mr Munjuri said.

Mr Munjuri complained about the slow pace at which the Foreign Affairs was addressing the trade stalemate with Somaliland.

“We have even been trying to have the Somalia border reopened to facilitate trade but nothing seems to be moving. The ministries of Trade and Agriculture have been engaging the Foreign Affairs on various issues. All miraa trade issues seem to be stuck at Foreign Affairs,” he said.

The move by Somalia was reportedly received with protests in Hargeisa by expectant miraa chewers.

Hargeisa, a major consumer of Ethiopian khat, is experiencing a shortage of the stimulant due to ethnic unrest in the Oromia region for the last five days.

According to Somalia-based news sites, the plane was denied entry due to the country’s air travel restrictions in a bid to contain the spread of Covid-19.

Somalia banned miraa imports three months ago to prevent the spread of the coronavirus. Despite Somaliland declaring unilateral independence in 1991, the issue of air traffic control is yet to be agreed on between Mogadishu and Hargeisa.

The semi-autonomous state is currently engaged in talks with Somalia, mediated by Djibouti, to resolve long-standing differences.

Air space control is one of the issues Somaliland wants solved in the talks that resumed late last month in Djibouti.

Somaliland, withdrew all Covid-19 restrictions, including those on public gatherings and international flights, on June 23.

In September 2017, Kenyan miraa traders also cashed in on khat shortage in Somaliland following disruption of the business by conflicts in Ethiopia’s Oromia and Somali regions.