The Third Contingent of the Independent Ship Protection Team (AVPD Team) of the Army of Montenegro (AMN) has returned from Somalia, where it has completed tasks under the operation Eunavfor Atalanta.

The Ministry of Defense announced that a team of 12 AMN members, under the command of Lieutenant Colonel Vladimir Stanojevic from the NAMN, had been on board of the ship “Juist” for four months, hired by the United Nations World Food Program.

“Their mission was to ensure the safe delivery of food and other assistance to the people of Somalia, making their mission both combative and humanitarian,” the statement said.

Deputy Head of the General Staff of AMN, Svetozar Brajkovic, welcomed the members of the army at the welcome ceremony and said that the task had been completed in Somalia.

The ship delivered about 13,000 tons of humanitarian aid to Somalia’s ports Berbera, Bosasso and Mogadishu from April 9 to August 30 and crossed eight thousand nautical miles.

The AMN team also resided in Djibouti and Mombasa ports.

“Each member of the team individually, as well as the entire Montenegrin AVPD team, has responsibly and professionally performed the task entrusted, honorably and proudly representing the Army and the State of Montenegro,” the statement concludes. 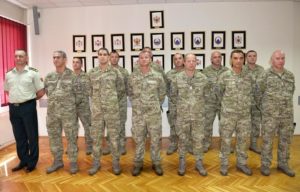 Welcoming of the AVPD team (Photo: Ministry of Defense)