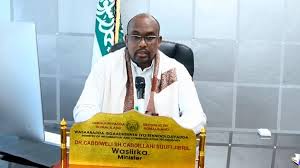 The Ministry of Telecommunication announced three regulations for the telecommunication sector in Somaliland on Saturday. They will organize the licensing telecommunication companies, SIM card registration and setting up telecommunication towers. It was unveiled at a function attended by the minister, Abdiweli Sh. Abdilahi Sufi Jibril, the top officials of the ministry & representatives from interior and national planning ministries. Mr. Abdiweli in an address at the function has firmly stated that these regulations are meant to protect the interests of both the investors and the consumers. He pledged that there will be a contribution of Somaliland’s policy of creating and enabling an environment and the development of the private sector.

Abdiweli said: ” The light handed policies of the successive Somaliland government has enabled business in the country to flourish. There were no barriers to investment and introducing new services. They will continue in that policy.”

The minister added that these regulations will further enable healthy competition among the telecommunication companies. He said that these would be in the best interest of all stakeholders. The ministry announced that they have seen working on these regulations for quite some time. Their guiding principles being creating & enabling environment for investment in compliance with int’l standards along with the protection of the consumer interests.

He said: ” The ministry taking up its duty has compiled the best practices in tower management, consulted experts and shared its findings with telecommunication companies. It was first in the form of guidelines but now it is an official regulation. Today I announce that without disadvantaging anyone and without shying away that these regulations are the best way to manage telecommunication tower.”

The second regulation issued today pertains to the registration of SIM card holders. The ministry gave an ultimatum of six months beginning from the 1st of August to complete the registration of their customers with govt issued identity cards. The third regulation issued today is for licensing telecommunication companies. The ministry unveiled that it is an updated version of the existing regulation and is compatible with world’s best practices.