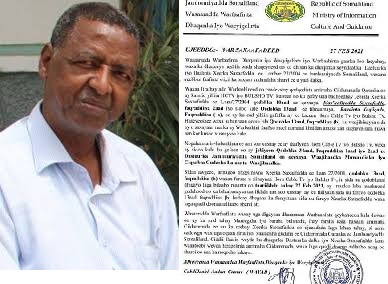 Hargeisa- The media industry in the country have been sternly warned, and cautioned, to uphold their ethical codes, standards, regulations and to be diligent, hence desist from flouting the constitution of the land as prescribed in the statutory legal books.

So too, have been two media houses given a two-day ultimatum to redact unsubstantiated news or face justice.

These were contained in a press release circulated yesterday, Saturday the 27th of February 2021 and signed by the Spokesperson of the Ministry of Information, Culture and National Guidance, Mr. Abdillahi Adan Omar (WAYAB).

Loosely translated, it went as follows:-

The Ministry of Information, Culture, and Guidance and private media sector have their ethical codes enshrined in the constitution and its observance regulated by the Media Law No 27/2004 of the Republic of Somaliland, hence expected to operate within the boundaries stipulated therein;

Anything other than that abounds to infringing upon the laws of the country.

It has thus happened that some media houses namely the HCTV and BULSHO TV which have perpetually disseminated items about National Armed Forces, while repeatedly flouting the Media Law No 27/2004 Article 10 which dwells on the Responsibility of the Media, Section 2; and also Article 13 which is about Verification of Facts (in Search of Truths) paragraph(a), flouted by both HCTV and BULSHO TV.

However, when misinformation occurs, or in effect, information are distorted due to various factors, the anomalies (Fake News) may be rectified as prescribed in same article section 13 paragraph (b) of the media laws.

The said distorted news that have been disseminated by both the HCTV and BULSHO TV as specified above also flouted Article 34 of the media laws.

Sections 1 and 2 of the constitution of the Republic of Somaliland which touches on the responsibility of the citizen and penalties for floating expected responsibilities.

It is thus; therefore, as per Media Laws No 27/2004, we have given the Horn Cable TV and Bulsho TV two days from today 27 February, 2021, to address the anomalies as per Article 13 section (b) noting that failure to do so would result in legal steps being taken against them.

In the same breath, the Information Ministry cautions all Media fraternity, including on-line and social media ones to desist from indulging into military (National Armed Force) matters which are sheathed by the media laws for the sake of national security so that enemies of the land may not take advantage of it.

Similarly, whoever does not refrain from the above mentioned misdemeanours would likewise be subjected to the legal steps being taken against them.