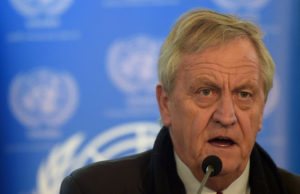 Haysom‚ a former chief legal and constitutional adviser to then president Nelson Mandela between 1994-1999‚ previously led a project helping to draw up Iraq’s transitional constitution. He was also involved in the UN committee negotiating a new Burundi constitution‚ and has served the UN in countries including Afghanistan‚ Burma‚ Indonesia‚ East Timor‚ Sri Lanka and Colombia.

Since 2016‚ he has served as the special envoy for Sudan and South Sudan.

The former National Union of South African Students (Nusas) president first made headlines in the fight against apartheid. According to the Sunday Times archives‚ he was detained without trial in 1976‚ 1978 and 1980 – the last time for five months. He was served with a banning order that put him under virtual house arrest for two years until 1982.

He cut his teeth in what he has called “the low-trust world of mediation” in Thokoza on the East Rand‚ where he negotiated a truce between warring hostel dwellers and the ANC-aligned population‚ said the Sunday Times. He then honed his skill in the negotiations for an interim and later final South African Constitution.

Born in 1952‚ he is married and has five children.