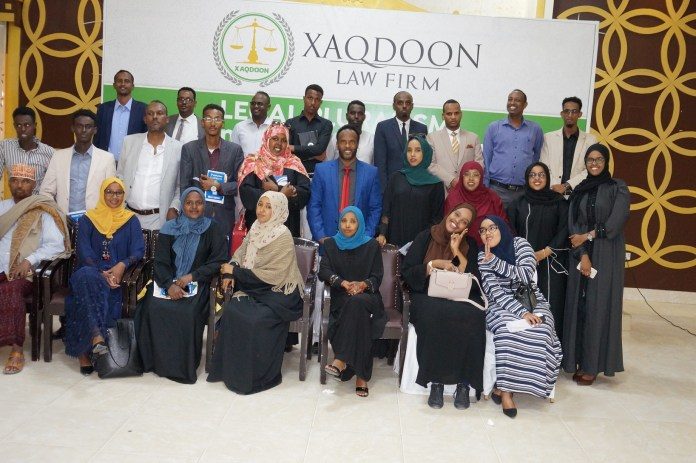 Hargeisa – XAQDOON law firm has opened a conference in Hargeisa to discuss the legal pluralism in Somaliland. At a well-organized ceremony, the management of the firm said that they will serve the society in all issues related to justice and law.

The conference was officially opened by the director-general of the Ministry of Parliamentary Relations and Constitutional Affairs, Jamal Abdi, and the director-general of the Ministry of Justice, Abdirahman Sheikh Hassan. Legal experts, traditional and religious leaders, civil society leaders, youth members and members from the public attended the conference.

Xaqdoon Law Firm, which is the oldest law firm in Somaliland has been working on legal services for over ten years. Its founders include the former Chief Justice of Somalia and Solicitor General of Somaliland, Ibrahim Eidle Suleiman.

“We want to do more on social issues and help our society in the development of the law,” says Guleid Ahmed Jama, the chairperson of Xaqdoon Law Firm. This workshop is funded by Xaqdoon and will not be the last one. We want to bring together the experts in the field to contribute to legal researching, he added.
The director-general of the Ministry of Parliamentary Relations and Constitutional Affairs, Jamal Abdi, welcomed the event. Our ministry is committed to working towards reforming the laws and legal system of the country, he said. “This kind of gathering will help utilize expertise towards that end,” he added. We thank Xaqdoon for organizing the event, he added.

Abdirrhaman Sheikh Hassan, the director of the Ministry of Justice, talked about in length the richness of the customary law, and the fact the customary law provides services in remote areas and villages. “The National Development Plan II prioritizes access to justice. The government’s objective is to make justice delivery available for the people. We work with all service providers,” he said. 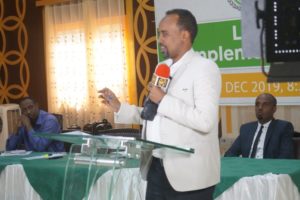 The Director-General officially opened the event, thanked Xaqdoon for hosting and urged the participants to discuss the issue in length and detail to provide a recommendation that will help policymakers. 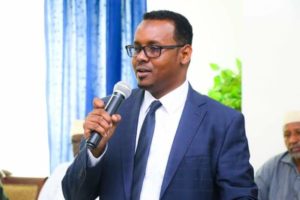 The day started with a panel discussion consisting of Chief Aaqil Abdi Guleid Gaboobe, a traditional elder, Jamal Hussein, the Secretary-General of the Lawyers Association, and Hibo Adan Gahayr, a lawyer. The panel discussion was heated by inputs from the participants who view the three systems.

At the end of the conference, we expect the outcome to be a report that can help improve the legal system of Somaliland and access to justice, Guleid said.

The conference is unique because it is the first meeting of its sort organized and funded by a law firm on the objective of seeking a solution for a legal problem.

Xaqdoon Law Firm has well-known and respected lawyers. The participants appreciated their decision to contribute to legal development.

Details of the conference:

The Republic of Somaliland has a constitution that delegates the law-making powers to a bicameral Parliament. The law-making powers are vested with the Parliament and “the power to legislate cannot be transferred to anyone outside the Parliament (article 38).  The constitution created a judiciary system tasked to “adjudicate on proceedings between the Government and the public and between the various members of the public (article 97). Since 1993, the first time a charter was formulated in Borama Conference, numerous laws have been passed by the Parliament.

Arguably at an increasing rate, Sharia Law based offices serve as alternative dispute resolution (ADR) mechanisms in urban places, particularly in Hargeisa. The Sharia-based ADR offices do not exist in rural and nomadic areas. Their usage is relatively new, and accessible for town people who can pay fees.

With this pluralistic system, there is no legal framework governing the relationships of the three systems. This legal lacuna raises many questions and often complicates the process where there are incidents of overlap, forum fishing and challenges in the enforcement of decisions.

The workshop intends to bring together practitioners of the three to discuss complementary and/or competition and to analyse solutions for any challenges facing the users of these systems. Particular emphasis will be made on the formal legal aspect in recognition or lack of in enforcing decisions made through customary or religious-based ADR. The participant will discuss what are the challenges and how these challenges can be addressed.

From a comparative point of view, the colonial period witnessed the birth of mixed legal systems that artificially conciliated between British, customary and Islamic laws, (Secular law, in the English language; Islamic law, in the Arabic language; and Unwritten Somali traditional law), with this specificity that neither system was in a position to dominate or eliminate the other.

Legal pluralism has become a major theme in socio-legal studies. However, under this very broad term, many different trends can be identified which share little but the very basic idea that law is much more than state law.

Legal pluralism may be defined as the condition in which a population observes more than one body of law. So long as there is some observance within a population, even of a slight degree, the body of norms may be considered as law for this purpose(Woodman1996, 1998,1999,2008,2011:36-37)

as per this definition is given by woodman denotes that state law pluralism is commonly coexistence within a state law of both received law and customary law as well.

it describes the historical scientific background of the theories, namely, the pioneer influence of Mauss and the works of Ehrlich, Malinowski,  Pospisil and Gurvitch. Woodman etc.

The people’s law and state law: an old dispute :
Durkheim : distinction between law and morality

Reactions to dogmatic conceptions of law are as old as social science. According to Durkheim, law is a social phenomenon that reflects “all the essential varieties of social solidarity”; “social life, wherever it becomes lasting, inevitably tends to assume a definite What is plural in the law?

Building on Durkheim’s legacy, Marcel Mauss formulated the idea that, within a society, there can be many legal systems interacting with each other, but he did not elaborate further. More relevant for present purposes is Bronislaw Malinowski’s definition of law, which he strongly associates with the notion of social control

The contribution of Eugene Ehrlich is central to the concept of legal pluralism. This Austrian sociologist developed the theory of “living law” in reaction to the ideology of an exclusively state-centered law. Considering that law is mostly independent from the state, Ehrlich proposes what he calls a “scientific conception of law”, which is about the rules of conduct. Accordingly, he states that “it is not an essential element of the concept of law that it be created by the state, nor that it constitutes the basis for the decisions of the courts or other tribunals, nor that it be the basis of a legal compulsion consequent.

As a system that has significant complexity.

As a co-existence and interaction among them.

This means that those three legal systems can work together as we experienced in Somaliland,  as noted before some writers- and I  agree with their argument – of Somaliland legal stratification suggested as stated by Professor Mancuso.

PLURALITY OF LAW AND PLURALISM

the important element of distinction between the plurality of law and the existence of a ‘multitude’ of legal system’: legal pluralism is concerned with the coexistence of different forms of law rather than with the coexistence of politically distinct(but, perhaps, legally identical) legal ‘systems’ which reflect the lack of political unity among men. While a multitude of ‘sovereign’  legal systems constitutes, without a doubt, one form of the plurality of law, it is not the one to which legal pluralism is responding -unless these systems also vary fundamentally in their legal characteristics, whether in relation to structure, processes, methods and so forth. Legal pluralism is primarily interested in basic legal alternatives- for example, in alternatives to rules and adjudication, rather than in the variations in the content of rules relating to the same subject matter, or in the different ways in which adjudicative bodies are organized.

The source of Somaliland law is constitutional law whose supreme law based/ grounded on the Sharia law. Moreover, state law commonly connotes secular law and customary that is developed from time to time by the elders /legislature. Today several legal orders derived from different sources (Traditional, Islamic and “official law”

Characteristics of Legal Pluralism and Domination

The situation of legal pluralism promotes forum shopping which in turn restricts access to justice for vulnerable groups who are less able to negotiate the different options.

Legal pluralism has been equated with a sort of “lawlessness”

As no uniform standard applies at any given time.

In other cases, although women access the justice system through a court, their cases are routinely removed from the courts by their elders. Women’s lack of knowledge of their options, and elders’ disrespect of allowing women to access any forum they see fit, leaves women in a precarious situation whereby they have little to no access to justice.

Dynamics of the interaction

The need for greater knowledge and a better understanding of the dynamics of these interactions.

This is true that the harmonization between these three legal systems are important in a comparative point of view, but it needs technical how, expertise in this field as well as to counter the existing challenges including but not limited the financial resource to be considered such doing research, misunderstanding  and lack of awareness

HOW TO BE HARMONIZED AND REFORMED

 the approaches of many scholars and scholarly trends to law; among which,

1.Griffiths’ radical theory,  Based on ideology, the superiority of legal order

The French-speaking research, the assumption that, because of the existing gap between legal practices and formal textual legal provisions, there is a plurality of laws

Legal pluralism as an anti-hegemonic counter-claim 28 Massaji Chiba’s theory of non-official laws remains apart from the different orientations described above. The main endeavor of this Japanese scholar is, Gordon Woodman says, “less to develop or clarify a definition of legal pluralism than to develop or clarify the features of certain instances of legal pluralism.” (Woodman, op.cit) Instead of simply opposing state law and people’s law, Chiba identifies many legal levels: official law, i.e. “the legal system authorized by the legitimate authority of a country” (1987:173);

legal pluralism. These critical stances vis-à-vis the legal pluralistic study of law are centered around three main questions: the definitional problem, the functionalist premises and the culturalist conception, all of which undermine existing theories. Among possible remedies, realism and praxiology are proposed as answers

I. The institutional approach: linking customary and state justice systems

1.Linkages between state and customary norms

3.Linkages between state and customary administration

Such linkages have the potential to incorporate human rights into customary norms, dispute resolution and administration,

Because some existing norms deemed unfavorable in terms of human rights, protection of marginalized groups

 The linkage will increase the accountability of customary administration,prevent power abuse and human rights violations, and enable a form of local administration that facilitates economic growth

Another approach to improve the functioning of customary justice systems is to target activities directly at marginalized community members.

 For example, the deployment of paralegals, legal literacy training, rights education campaigns which can then translate into pressure on customary justice systems to better protect human rights. They can also empower marginalized community members and reduce power imbalances

by enacting a national law.

Initiation of the Case