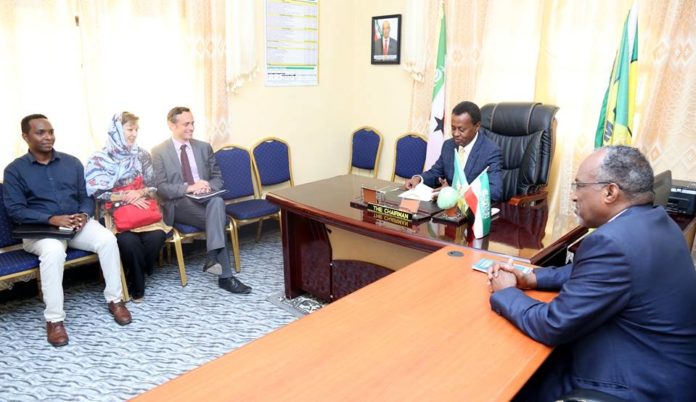 The second deputy chairperson of Kulmiye governing party, Mr. Ahmed Abdi Dheere together with former Somaliland finance minister, Mr. Abdiasis Mohamed Samale met and held talks with European Union officials who paid a courtesy call to the ruling party head quarters today. The EU delegation and Kulmiye party officials discussed a number of important issues. The mission behind the delegation’s visit to the country is to asses if Somaliland is ready to hold parliament and local council elections. Mr. Abdi Dheere speaking on the issues that were high on the agenda of the talks with EU said that they discussed with the preparations of the forthcoming parliamentary and local council polls which are slated to transpire at the end of this year in Somaliland. They also discussed if all necessary mechanisms are put in place paving the way for free and fair parliament polls. He stressed that the government is committed to live up to its promises and hold the polls on time as agreed with other parties. There was a row concerning the possibility of holding parliament elections in the country. The EU plays a huge role in providing support to Somaliland’s cycle of democracy.