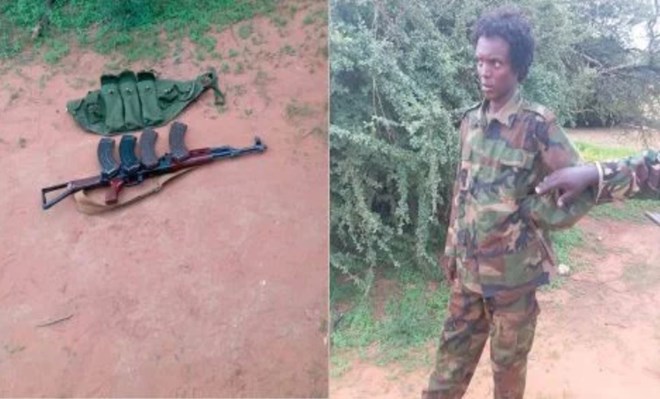 A Kenyan Al-Shabaab fighter on Thursday surrendered to the Kenyan Defense Forces in the town of Bura Hache along the Kenyan- Somalia border.

Hassan Hussein Ali, 24, was born in Bangal, Tana River County. He said he joined the militia group in August 2018 and was training with them until last month.

An intelligence report seen by Nairobi News indicates the fighter was supposed to be deployed to the North Eastern region in Wajir or Mandera where Al-Shabaab has been planning to carry out attacks.

“He joined AS in August 2018 and just completed training a month before Ramadan and was in the process of deployment along Wajir- Mandera,” read part of the report.

The fighter also surrendered an AK47 firearm and four magazines plus pouches he was given by the militia group.

For the last two weeks, KDF soldiers and officers in the North Eastern region have been on high alert following reports that Al-Shabaab fighters are crossing into Kenya.

The defection comes just one month after Kenyan soldiers killed three Al-Shabaab terrorists and captured another in the same town of Bura Hache.

In a statement, the Defence Ministry said KDF troops who are part of the African Union Mission in Somalia (Amisom) confiscated two AK 47 rifles, one SLR rifle and assorted ammunition.