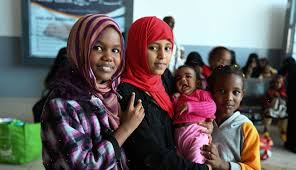 Almost 4,300 Somali refugees have now returned home from Yemen, since the roll-out in 2017 of an Assisted Spontaneous Return (ASR) programme, facilitated by UNHCR, the UN Refugee Agency in cooperation with humanitarian partners and authorities in Yemen and Somalia.

In the latest departure, a boat carrying 125 Somali refugees departed Aden on Wednesday afternoon. The vessel arrived at the Port of Berbera in Somalia yesterday morning, bringing home men, women and children in time for the Islamic holiday of “Eid” next week, which is observed at the end of the fasting month of Ramadan.

Those who returned home this week include Somalis who had been born in Yemen to refugee parents, and others who were born in Somalia and who fled to Yemen hoping to escape conflict and insecurity.

With Yemen being the world’s largest humanitarian crisis and civilians facing life-threatening conditions, the situation for refugees and asylum seekers and migrants has deteriorated significantly.

Somali refugees comprise 90 per cent of Yemen’s refugee and asylum seeker population, or some 250,000 people.  Refugee movements from Somalia to Yemen have been taking place since the 1980s. They continued following the outbreak of civil war in Somalia, with many fleeing generalized violence and individualized fear of persecution in addition to the consequences of drought and a lack of livelihood opportunities.

As a long-standing refugee host nation and the only country in the Arabian Peninsula signatory to the Refugee Convention and its Additional Protocol, Yemen currently hosts the world’s third largest Somali refugee population.

But with the conflict becoming prolonged, UNHCR, Yemeni national authorities and humanitarian partners face significant challenges in ensuring safety, humanitarian assistance and access to essential life-saving services for refugees and asylum-seekers in the country.

Just this month, Somali refugees were among those injured when strikes hit Yemen’s capital, Sana’a. In addition to the dangers posed by conflict many refugees now face increased hardship, lack access to basic services and struggle to cover basic needs and sustain themselves given the limited work and economic opportunities.

As a result, an increasing number of refugees have been approaching UNHCR for help in returning home, citing safety and security concerns and limited access to services. Thirty-three organized departures have now taken place from Yemen to Somalia since the commencement of the ASR programme in 2017.

Those returning home are assisted by UNHCR and partners, including the International Organization for Migration (IOM). They are helped with documentation, transportation and financial support in Yemen to facilitate the journey, as well as return and reintegration assistance.