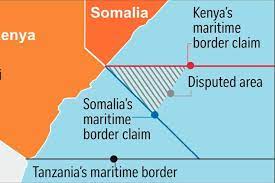 Kenya on Friday said the verdict of the Int’l Court of Justice (ICJ) on the maritime dispute case between Somalia and Kenya will be the culmination of flawed judicial process.

Kenyan president Uhurru Kenyatta pointed out that it had withdrawn the compulsory jurisdiction of the court due to the reservations with the process on accounts of “bias” and ” unsuitability”.

Kenyan Foreign Principal Secretary Macharia Kamu said: ” The delivery of the judgement will be the culmination of flawed judicial process that Kenya has had the reservations with, and withdrawn from, on the accounts not just bias but also of its unsuitability to resolve the dispute at hand.”

For those reasons and in addition to withdrawing its preparation from the current case, Kenya, on the 24th September, 2021, also joined many other members of the United Nations in withdrawing its recognition of the court’s compulsory jurisdiction. As sovereign nation, Kenya shall no longer be subject to an int’l court or tribunal without its express consent.”

Somalia had demanded a review of the maritime border in what could change the ocean territory for the two countries if the Int’l Criminal Court rules in favor of Somalia.