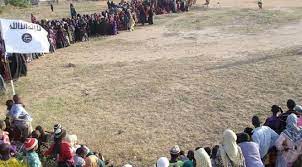 Al-Shabab militant group executed four men, including two soldiers in south Somalia after being found guilty by courts of the Islamist movement.

Abdullahi Oyow Mayane, 20, who had been convicted of committing acts of homosexuality against a 6 year-old boy was executed by firing squad on Wednesday in the town of Kamsuma with 24-year-old Jubaland soldier Abullahi Mohamed Farah.

Al shabab publicly executed another two men in the town of Jamame in the middle Juba region.

One of the men, Mohamed Mowlid Adan, 48, was a member of Jubaland troops and had been captured at Janay Abdalle village outside the coastal town of Kismayo.

The militant group also executed a magician who had been arrested while performing sorcery in the agricultural town of Jamame.