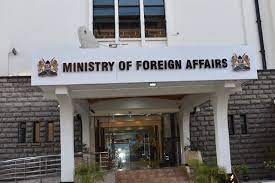 Kenya’s government expressed its regret over the presence of the flag of Somaliland at a diplomatic function after an angry Mogadishu accused Nairobi of violating its sovereignty.

Somalia’s ambassador to Kenya, Mohamoud Ahmed Nur, walked out of the event in Nairobi on Tuesday in protest at the presence of the Somaliland envoy, its embassy said in a statement.

“The Ministry of Foreign Affairs regrets the inadvertent and inappropriate presence of the flag o Somaliland at the Annual Diplomatic Function. The Ministry further wishes to reaffirm its recognition of one Federal Somalia Government and the integrity of the Federal Somali State,”

“The Ministry of Foreign Affairs of the Republic of Kenya avails itself of the opportunity to renew to the embassy of the Federal Republic of Somalia in Nairobi the assurances of its highest considerations.”

Somalia also agreed to resume imports from Kenya of the narcotic leaf khat after a two-year ban, as part of a wider trade deal being forged between the East African neighbors.

Mogadishu had severed diplomatic relations in December 2020 after Nairobi hosted the political leadership of Somaliland but they agreed to reset ties in August last year.