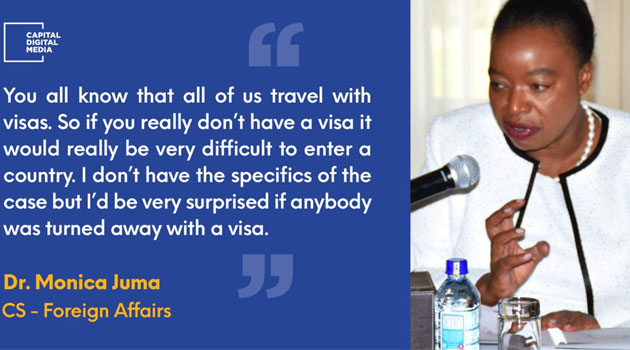 Mogadishu-based Radio Dalsan had reported that Somali Deputy Minister of Water and Energy Osman Libah and Senators Ilyas Ali Hassan and Zamzam Dahir were turned away on arrival at the Jomo Kenyatta International Airport for lack of visas.

Immigration officials reportedly advised the three diplomatic passport holders to obtain visas at the Kenyan Embassy in Mogadishu before clearance.

Foreign Affairs Cabinet Secretary Monica Juma declined to comment on the matter on Tuesday saying she did not have particulars of the case but added no foreigner holding a valid visa would be turned away from the country.

“You all know that all of us travel with visas. So if you really don’t have a visa it would really be very difficult to enter a country. I don’t have the specifics of the case but I’d be very surprised if anybody was turned away with a visa,” she said.

The denial of entry to the Somali officials was seen as a resumption of a diplomatic tiff between Kenya and Somalia despite foreign ministers of the respective countries agreeing last month to normalise relations after a nearly two-month diplomatic row over a maritime border despite.

Somalia’s Ahmed Issa Awad and CS Juma had on April 3 expressed “a strong desire to normalise relations,” with an agreement to allow their respective ambassadors return to their diplomatic postings in Nairobi and Mogadishu.

“We reaffirmed our strong desire to normalise relations and agreed, as a first step, to have our ambassadors return to their stations,” Kenya’s Foreign Office tweeted.

Tensions between the two countries escalated in February after Foreign Affairs Principal Secretary Amb Macharia Kamau summoned Kenya’s diplomat in Somalia, Ambassador Lt. General (Rtd) Lucas Tumbo, for what he termed as “urgent consultations” while referring Somali envoy to Mogadishu for the same.

In a strongly-worded statement issued on February 16, Amb Kamau described actions by Mogadishu to sell off oil blocs in a disputed maritime triangle as an “unparalleled affront on Kenya” and an “illegal grab” that will not go unanswered.

Somalia was said to have offered potential oil fields lying in a disputed 62,000 square mile Indian Ocean triangle to foreign investors at a London auction on February 7.

“This outrageous and provocative auction deserves and will be met with a unanimous and resounding rejection by all Kenyans as well as all people of goodwill who believe in the maintenance of international law and order and the peaceful and legal resolution of disputes,” Amb Kamau said at the time.

Although State House did not release an official communiqué of the meeting held in Nairobi on March 6, Ahmed’s office said the parties had resolved to amicably resolve differences of the maritime border dispute which is before the International Court of Justice (ICJ).

“Through the leadership of PM Abiy Ahmed, Presidents Uhuru Kenyatta and Mohammed Abdullahi met this morning to discuss extensively on the source of the two countries dispute. As an outcome both agreed to work towards peace and to take measures in addressing particular issues that escalated the tensions,” Ahmed’s office said.

Prior to the March 6 mediation meeting, the Ministry of Foreign Affairs had held a series of meetings with foreign diplomats including envoys whose nations sit in the United Nation and African Union Security Councils to brief them on the unfolding situation.

Amb Juma had told Capital FM News on February 27 her ministry had briefed ambassadors of nations with membership at the United Nations Security Council and the African Union Peace and Security Council in a bid to provide clarity on the matter.

“We briefed them on the situation between ourselves and Somalia, provided the facts to both councils and to draw their attention to the situation,” she said.

Among foreign envoys who attended the meeting with top officials of the Foreign Ministry on February 22 included Britain’s Nic Hailey and France’s Aline Kuster-Menager.