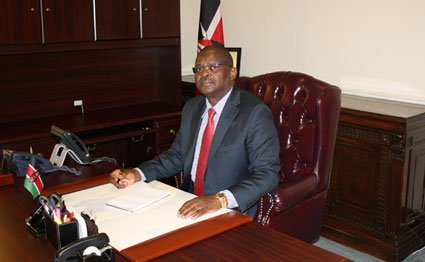 Kenya’s ambassador to the US Robinson Njeru Githae may move to Moscow, Russia in changes planned by Foreign Affairs CS Monica Juma.

The ministry proposes that Mr Githae be moved to Moscow or dropped altogether.If President Uhuru Kenyatta considers the proposal, Githae will replace Richard Ekai.Mr Ekai, a former PS in the Ministry of Sports, Culture and Arts, was charged over the alleged mismanagement of funds during the 2016 Rio Olympics Summer Games shortly before he reported to Moscow.This scuttled the new appointment, leaving the station to be managed by junior diplomats as the former PS battled abuse of office charges.In a letter to the Head of Civil Service Joseph Kinyua, dated February 27, 2019, Dr Juma proposed that either Stephen Karau, the Kenya’s envoy in Seoul, South Korea, moves to US or Mwende Mwinzi is appointed to the station.Juma wants Lazarus Amayo, who is the country’s ambassador/Permanent Representative to the UN, as well as Anthony Muchiri, who is in charge of Cuba, retained.The CS has also recommended that the ministry’s Political and Diplomatic Secretary Tom Amolo be appointed envoy to Rome. She also wants him to campaign for Kenya’s quest to sit in the United Nations Security Council.Former Higher Education minister Hellen Sambili is proposed to head the Kenyan mission in Harare, Zimbabwe, while film producer Njeri Njiiri Karagu has been recommended to head the Kenyan consulate in Los Angeles.Githiora Philip Mundia has been proposed to establish the Kenyan mission in Hargeisa, Somaliland, perhaps an indication Nairobi will finally recognise the self-declared semi-autonomous state.Yesterday, Foreign Affairs PS Macharia Kamau said implementation of the planned changes was “progressing well and new appointees will report in good time”.Appointing authorityAsked when the changes affecting ambassadors such as Githae would take place, he responded: “That will await the appointing authority’s announcement.”Flora Karagu has been proposed as the new envoy in Lusaka, Zambia.In other changes that do not require a presidential nod, Juma has shuffled officers who will be deployed around the world.They include Consul General of Kenya in Dubai and the Northern Emirates, Kariuki Mugwe, who moves to Abu Dhabi in the same position, and Barine Elphas Mugendi, who moves to Accra, Ghana.