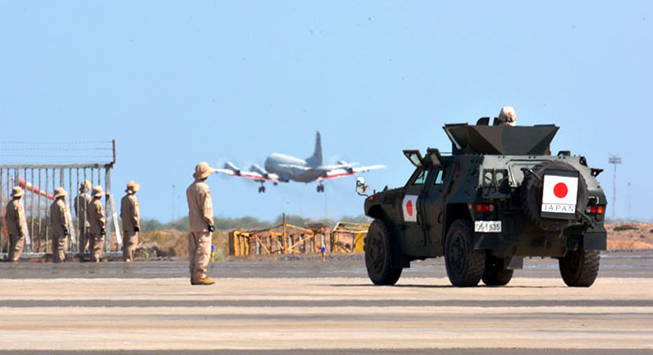 The Defense Ministry is moving to expand the Self-Defense Forces’ base in the strategically important eastern African nation of Djibouti for a wider range of missions other than anti-piracy operations.

One reason is due to concerns about China, which is exerting growing influence in the region as it forges ahead with plans for a “One Belt One Road” initiative to create a vast economic zone stretching from East Asia to Europe through land and sea routes.

China began operating its “base” in Djibouti in 2017.

The Defense Ministry’s plan for an upgraded SDF base in Djibouti is expected to be included in new National Defense Program Guidelines, a mid- and long-term defense policy that will be revised in December.

Although the reasons for using the facility in Djibouti have diminished significantly, the ministry is keen to expand its functions beyond anti-piracy operations based on security legislation enacted to give the SDF wider scope in its overseas activities.

A rash of pirate operations targeting commercial vessels prompted Japan in 2009 to join other nations in setting up anti-piracy operations in the region. The Maritime SDF has deployed vessels to patrol waters off Somalia and the Gulf of Aden to protect shipping lanes.

Currently, an MSDF destroyer and two P-3C patrol aircraft are deployed to provide protection against pirates.

In 2011, Japan set up the base in Djibouti by leasing a 12-hectare-plot next to Djibouti International Airport from the Djibouti government. The facility, the first base for the SDF beyond Japan, featured an apron for aircraft, a hanger and housing for SDF members.

Last year, the facility was expanded to 15 hectares, as an additional plot was leased.

Under the current guidelines, there is a passage that states that Japan will consider “measures to further utilize” the SDF site in Djibouti.

The ministry has since studied how the United States, Britain and France operate their military facilities in Africa and the Middle East as part of efforts to explore ways to utilize the SDF base for missions other than the anti-piracy operations.

The SDF has already used the Djibouti site for the transport of logistics for SDF members participating in U.N. peacekeeping operations and for evacuation drills conducted under a scenario to rescue Japanese nationals living overseas who are at risk of being harmed in a conflict.

The latter task for the SDF was added in a package of security-related legislation that passed in 2015 to expand the role of the SDF overseas.

Djibouti is strategically situated as it sits in close proximity to sea routes linking the Indian Ocean and the Mediterranean.

The government plans to use the SDF’s Djibouti base as a stopover point for operations to transport Japanese nationals if and when an emergency rises, such as the case in Algeria in 2013, when 10 Japanese were killed after a natural gas facility was seized by an armed group.

Although the SDF’s Djibouti site was initially set up for anti-piracy operations, that threat is now much less than it was.

The Defense Ministry acknowledged that pirates were not as active as before, but it is poised to continue with the SDF deployment for the time being on grounds the “threat from pirates remains.”

The ministry felt it needed that excuse to maintain the facility amid growing pressure in recent years to withdraw due to fewer attacks on commercial shipping from pirates.