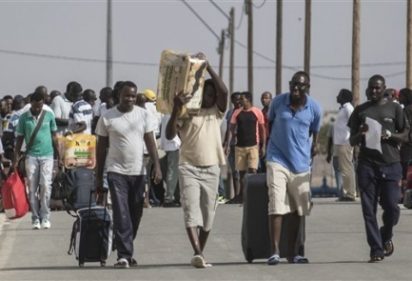 PM Netanyahu instructs national security adviser to re-examine option of deporting Eritreans back home after court rules that doing so is legal if Eritrea revokes its mandatory draft • Judge says Israelis have “suffered for years” due to illegal migrants. 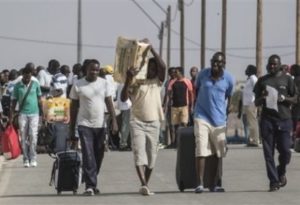 The directive follows a ruling by the Justice Ministry’s Appeals Tribunal stating that with Eritrea planning to cancel its mandatory draft, it would allow the state to send Eritreans illegally in Israel back home.

In his extraordinary decision, Judge Menahem Pashititzky wrote: “I recommend the Israeli government rescind the policy of ‘non-deportation’ currently in effect as it pertains to the illegal migrants from Eritrea, and to order their direct deportation to their home country, regardless of their political position in support or in opposition to the regime.”

Rejecting the appeal for political asylum, the judge said the tribunal “relied on the opinion that asylum requests based on defection or evasion of military service in Eritrea do not alone amount to political oppression, are not reasonable and appropriate, and [the tribunal] sees no place to intervene.”

Pashititzky also said that “Israeli residents have greatly suffered for years” due to the influx of illegal migrants from Africa.

“The rampant crime in the streets and cities perpetrated by illegal migrants, the justice system’s leniency as it pertains to pressing criminal charges and the solutions which have thus far been attempted – the Holot detention center, third-party countries, the ‘deposit law‘ and the United Nations’ blueprint – have failed,” he wrote.

“In light of the many years that have passed … and due the government’s failure to remove [the illegal migrants] to a third-party country or persuade them to leave voluntarily, common sense dictates no other recourse but direct deportation to their country of origin.

“The time has come to change Israel’s immigration policy on the matter of illegal migrants from Eritrea and to determine there is nothing to prevent returning them safely to Eritrea. The Israeli government must implement a new policy toward the illegal migrants from Eritrea and at the same time adopt the Federal Supreme Court of Switzerland’s position, which leans on reports written in recent years by governments and organizations in Europe.

“The considerable amount of information gathered on Eritrea, specifically the end of the war between Ethiopia and Eritrea and the annulment of indefinite mandatory national service, justifies a change of direction and action to expel the illegal migrants from Eritrea while accounting for individual asylum cases,” he wrote.

The Tel Aviv-based Hotline for Refugees and Migrants organization said the ruling was “irregular and launches an unprecedented attack on the decisions of the Supreme Court and the government. Israel cannot deport Eritreans to their home country due to threats to their safety and lives.”

Israel’s roughly 35,000 African migrants, mainly from war-torn Sudan and dictatorial Eritrea, began arriving in Israel in 2005 through Egypt after Egyptian forces violently quashed a refugee demonstration and word spread of safety and job opportunities in Israel. Tens of thousands crossed the desert border, often after enduring dangerous journeys, before Israel completed a barrier in 2012 that stopped the influx.

Since then, Israel has wrestled with how to cope with those already in the country. Many took up menial jobs in hotels and restaurants, and thousands settled in southern Tel Aviv.

The Foreign Workers Law – also known as the “deposit law” – was implemented a year ago and allows the government to withhold 20% of migrants’ monthly paychecks, to be returned only if they leave the country.

Migrants and the NGOs that support them say the law is yet another attempt by an anti-migrant government to force them out.

“I feel that they started the ‘deposit law’ to make our life miserable,” said Salamwit Willedo, a migrant from Eritrea who came to Israel in 2010. “We suffer for eight years here. If I had a country, why am I living here?”

In April, Israel reached an agreement with the United Nations to have many of the migrants resettled in Western countries, with others allowed to stay in Israel. But the government quickly scrapped the deal after a public and political outcry.

The measures have kept the migrants living in limbo. The overwhelming majority have not been granted asylum. Some say they are victims of racism.

Israel rejects such accusations but does not hide its intentions behind the deposit law, which according to the Interior Ministry is meant to make Israel a less attractive option for migrants.

Unlike a tax, the withholding does not grant the migrants any additional social services, to which their access is already limited. Employers are also tasked with storing an additional 16% of a migrant’s salaries toward a pension fund, making this social benefit inaccessible until asylum seekers choose to leave Israel.

Employers who hire migrants must also pay an additional tax, implemented to encourage employment of Israeli citizens over foreigners, which makes finding work an even greater challenge for the migrants.

While Israel does not shy away from the law’s goals, a spokeswoman suggested the money serves as a savings account for migrants choosing to leave Israel.

Interior Ministry spokeswoman Sabine Haddad said the savings provide “a proper starting point for the beginning of the migrants’ new lives outside of Israel.”

She said the state is currently holding nearly $40 million in the “deposit accounts” of more than 13,000 migrants. Of the thousands who have left Israel voluntarily, 400 have withdrawn their money, she said.

However, the law is being challenged in the Supreme Court. Under international law, Israel cannot legally deport asylum seekers.

“Always we are living under threat and uncertainty,” said Ghebrehiwot Tekle, an Eritrean who has lived in Israel since 2006 and works as a translator for an aid group. “Every year there will be a new law that can make our life hard.”

A year after the law’s implementation, the 20% salary reduction has been deeply felt by Tel Aviv’s community of asylum seekers.

According to accounts from various advocacy groups and asylum seekers, the impact ranges from people switching to black market jobs that pay them in cash to more women entering prostitution.

Families are also being forced to move into smaller apartments, choosing to place their children with uncertified, often unsafe baby-sitters, and giving up on paying for their children’s health insurance.

ASSAF, an Israeli aid group for migrants, has tracked the law’s effects since it was enacted. It said that requests to the group for food assistance by migrants have increased by a third over the past year. Inquiries regarding job loss increased by more than half and there was a more than 80% increase in migrants registering concern over homelessness.

“They used to be poor before as well. Now they are more poor,” said Sigal Rozen, public policy director for the Hotline for Refugees and Migrants.

For some migrants, even the inhospitable measures are not enough to convince them to leave Israel. Tekle, the translator, believes his fate could be much worse if he were to leave and pursue the same perilous journey other migrants have taken to Europe.

“There is no better situation,” he said.