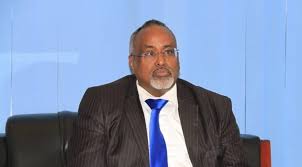 The minister is alleged of violating a directive of preventive measures issued by the state president.

The minister is accused of attending a ceremony held in Jawhar yesterday.

The late state minister for justice Khalif Mumin died due to complications of Covid-19.

Top officials of state Hirshabelle have gone into quarantine after the death of the minister.

Somalia’s tally of Covid-19 has seen a big jump and has so far confirmed 231 cases where most patients are in Mogadishu.