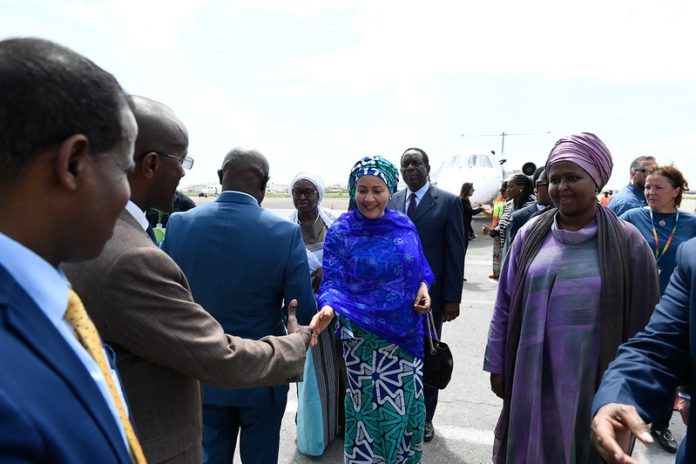 On a visit to the Somali capital today, a high-level delegation of United Nations and African Union officials welcomed the Horn of Africa country’s achievements in women’s participation in its peace, security and development efforts– while also calling for further progress.

“After decades of conflict and amidst the ongoing violence the people of Somalia still faces, the country has made enormous strides on its path to peace and stability. In our short visit here, we have heard from government officials and civil society leaders how Somali women taking part in peace and security efforts has helped advance society towards an inclusive and peaceful future. This is the future the people of Somalia rightly deserve and which the United Nations and African Union fully support,” said the UN delegation’s head, the UN Deputy Secretary-General, Amina Mohammed.

“However, much more remains to be done, especially to ensure gender equality, including women’s full participation in the ‘one person, one vote’ federal elections next year. We welcome recent gains, especially in the areas of human rights, civic and political participation, access to justice and basic services,” the Deputy Secretary-General added.

Ms. Mohammed was joined by the African Union Special Envoy on Women, Peace and Security, Bineta Diop, and the Special Envoy of the UN Secretary-General for the Horn of Africa, Parfait Onanga-Anyanga.

The aim of the one-day visit was to express the UN and AU’s commitment to work with the Somali people in their pursuit of peace, stability and credible elections. The delegation underscored the importance of women’s meaningful participation in political, peace and security efforts, particularly in relation to countering violent extremism, holding elections and advancing development efforts. The delegation also expressed its strong support to the critical role played by AMISOM and IGAD in consolidating the peace process in Somalia.

While in Mogadishu, the Deputy Secretary-General met with Prime Minister Hassan Ali Khayre and cabinet ministers from the Federal Government of Somalia to hear about government policy. The full delegation met the Chairperson of the National Independent Electoral Commission, Halima Ismail Ibrahim, and a group of women civil society leaders who discussed the upcoming ‘one person, one vote’ elections and countering violent extremism, among other topics. The AU Special Envoy on Women, Peace and Security also met with female peacekeepers.

“The opportunity to hear from a diverse range of voices about the role of Somali women in different spheres of life drove home just how vibrant and engaged they are, and also how committed they are to ensuring that the role of women and gender equality is factored into all facets of life here,” said the Deputy Secretary-General. “This means challenging some outdated traditional views on the role of women and creating a space for them to be able to fulfill their potential.”

The AU Special Envoy on Women, Peace and Security stated on behalf of the African Union Chairperson, Mr Moussa Faki “I strongly believe in the critical role played by women in peace operations. I salute the sacrifices and outstanding commitment to peace and stabilization efforts in the context of AMISOM.”

The delegation’s activities also included meetings with senior officials from the UN Assistance Mission in Somalia (UNSOM), UN Support Office in Somalia (UNSOS) and UN agencies, funds and programmes to be briefed on the work the world body is carrying out to support Somalia’s progress towards political inclusion, lasting peace and socio-economic development, particularly in relation to Somalia’s efforts to achieve the Sustainable Development Goals.

The UN-AU delegation was in Somalia as part of a six-day trip to countries in the Horn of Africa region.