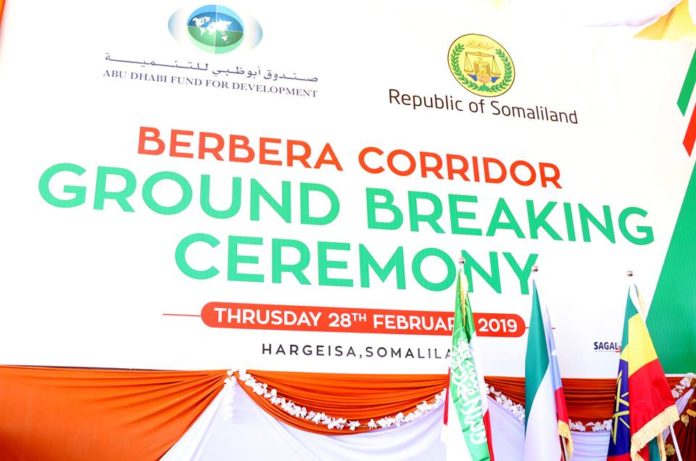 HARGEISA–The president of Somaliland H.E Musa Bihi and accompanied by the president of Ethiopia’s Somalia State, H.E Mustafe Mohamud Omar and and UAE senior gov’t officials have laid the foundation stone of launching Berbera Corridor today. The construction of the road will soon kick off according to the presidential press release. The groundbreaking ceremony for Berbera Corridor was held in the vicinity of Hargeisa, the capital of Somaliland. The well-organized ceremony saw the attendance of SL Head of State, Musa Bihi, Ethiopia’s Somali regional president, H.E Mustafe Mohamud Omar alias Agjar, deputy head of Abu Dhabi Fund for Development, Mr. Khaliifa Al Qubaisi, Ethiopian and Djibouti consuls in Somaliland, officials from the political parties, former vice president, and other guests. The deputy chairman of Abu Dhabi Fund for development, Mr. Khaliifa Al Qubaisi in which his firm has won the tender for constructing Berbera Corridor has emphasized that road will ease the trade movement between Ethiopia and Somaliland. The minister for transport $ roads development, Mr. Abdilahi Abokor Osman has announced that the government of Somaliland will spend 111,000,000 dollars for the construction of the road linking Ethiopia and Somaliland.

Berbera Corridor road building will commence on the 15th of March, 2019.

The president of Ethiopia’s Somali State, Mr. Mustafe Agjar has pointed out that the corridor will pave the way for trade integration between Somaliland and Ethiopia. Mr. Agjar has praised SL for its role in security cooperation and the stability in the region. He urged both the government and its populace to continue attracting the attention of the world. President Bihi in his speech at the function has highlighted that the construction of the corridor, the modernization of Berbera port and the creation of Berbera free zone and Berbera airport are part of ways to increase trade in Somaliland and also in the region. The 250KM Berbera corridor will see the building of 7 bridges as the road links Ethiopia and Somaliland.