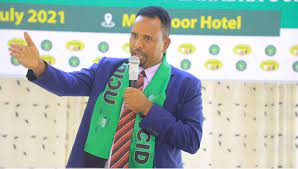 On May 31, Somalilanders went to the polls to elect a new parliament for the first time in sixteen years. With no incumbents running for reelection, the result was an 82-member House of Representatives made up entirely of new legislators. One of those winning a seat was Mohamed Hassan Saed, a former IRI employee who leveraged his experience in governance programming to run a successful campaign. He now hopes to continue that momentum by solidifying parliament’s ties with IRI, allowing his colleagues to take advantage of IRI’s planned legislative strengthening activities in Somaliland.

After working in Somaliland’s civil society for several years, Saed became a Program Officer at IRI’s Hargeisa office in 2008. Over the next two years, Saed oversaw a variety of programming in the country, including a robust capacity building series for parliament that culminated in the development of a constituency outreach manual for MPs to use as they kept in touch with their constituents. As Saed facilitated positive results for Somaliland’s parliament, he attracted the attention of the country’s political leadership. This culminated in his appointment as Somaliland’s Ambassador to Ethiopia in 2010, ending his time at IRI.

Over the decade since then, parliamentary elections have been postponed multiple times, and Saed watched the MPs who had shown great concern for their constituents during IRI’s programming become increasingly detached from the people. The MPs had lost interest in exercising their oversight and representational functions. In response, when elections were finally confirmed for May 2021, Saeddecided to declare his candidacy for parliament in the Maroodi Jeh region.

As he launched his campaign, Saed found his experience with IRI to be a great advantage. “It gave me the inside information on what parliament does,” he said, allowing him to make a detailed case not only for what he would change but how. “When I worked with IRI, we used to hold campaign training[s] for political parties. I used those training [manuals] for my own campaign.” He further drew on the skills he gained as an IRI staffer to streamline the campaigns of others in his party on their way to winning a plurality of seats in Maroodi Jeh.

Now, as he transitions into life as an MP, Saed is eager to begin legislating. The trainings that he designed for parliament 12 years ago are proving useful once more. “As I became familiarized with IRI’s programming, I was able to design and initiate my own [curriculum],” he explains. “That opportunity gave me the skills to develop policies,” now that he is in parliament.

This background has caught the attention of the new Speaker of the House of Representatives, in which Saed serves. The Speaker recently appointed Saed as the parliament’s Liaison MP for Development Partners, meaning he is tasked with coordinating with Somaliland’s international NGO partners such as IRI. This comes at a time when IRI is ramping up its activities with the new MPs.

In the coming weeks, IRI will hold a capacity building training for the newly formed parliamentary committees and will support the lawmakers in developing a strategic plan for their term in office. Subsequently, based on the results of a limited legislative needs assessment IRI recently carried out, IRI will initiate a series of activities designed to entrench a more regulated and productive relationship between MPs and their constituents. To overcome the logistical challenges that often prevent lawmakers from returning to their districts and engaging with voters, IRI will pair the parliamentary delegation from each region with a local civil society organization to organize town hall forums, solicit the input of citizens, and aggregate this feedback into policy plans.

Thus, with his legislative programming experience gained as an IRI employee, paired with these activities targeted at constituent outreach, Saed (and his colleagues in parliament) will have the tools to build a stronger relationship with their constituents and rectify the reputation the previous parliament had earned as being out of touch with the needs of citizens, taking the country further along its path of entrenching representative democracy and citizen-focused governance.