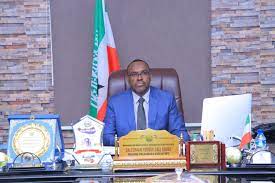 The Minister of Information, Culture and National Guidance Hon. Suleiman Yusuf Ali Koore has asserted that the series of tragic incidents happening in Lasaanod, the capital of Sool region, were issues perpetrated by foreign terror insurgents.

The minister who happens to be the official government spokesperson, at the same time, sent his condolences to the family members and relatives of all the people who died in the tragic riots that the end of the week that happened in Lasaanod.

He mourned the assassinated councilor Hadrawi whom he described as having been his close friend, terming his murder as grossly unjust.

Minister Koore was speaking at a press conference Sool regional headquarters in Lasaanod. Present were the Minister of Justice, and regional and area district administrators.

He stated those behind Hadrawi’s murder were not the people and government of Somaliland but foreign perpetrated insurgency terrorism tailored to mislead the people and sway the nation from its aspirations.

He said that all the people who were murdered in similar circumstances were all working steadfastly for the nation of Somaliland and included eminent personalities, politicians and activists.

He said that the assailant who killed Hadrawi and those who orchestrated the murder were in cahoots working together.

“The acts of terrorism are carried out by people who do not care about the people of Lasanod or Somaliland at all”, said the minister.

He observed that following the fracas in the wake of riots emanating from the killing, the troops tactically retreated from the city for two nights hoping for calmness to return, but mayhem set in full swing.

“The mayhem was everywhere and massive plunders occurred, even the cooked meat was looted from restaurants”, said the minister and continued, “but now with the troops in control of the security, there is now secure calmness”.

He called on people speaking from outside the country to understand that the region needs those who are development conscious and cautioned against retrogression by fanning inflammatory words of war-mongering.

Minister Koore criticized how the opposition organizations talked about the issue of Lasaanod, saying that they did not know the difference between the petty campaigns and the national existence of Somaliland.

He called upon the intellectuals and the community members of Sool region to work concertedly and arrest the situation as it is such that it may not deteriorate hence charting out a better way forward.