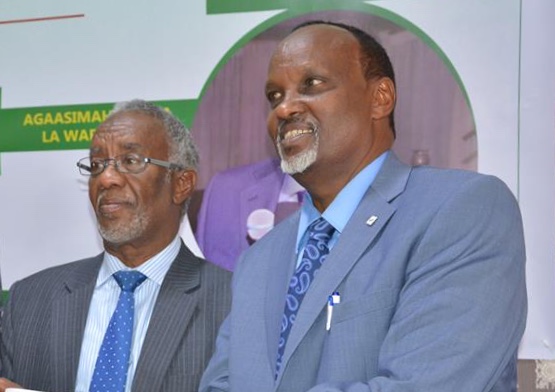 The new minister of education Hon. Osman Jama Adan took over the mantle of his portfolio from the outgoing minister Hon. Yasin M. Hiir who was moved to the foreign docket.

Hon. Osman who happens to be a veteran educationist is a new face in the cabinet and the political scene of the country thanked the president for having chosen him for the task hence pledged to steer the ministry to its desired stratagem.

In his own words he asserted that “imparting education is my passion”, a field he has been indulged in up to the moment he has been handed the baton to lead the whole of the education industry.

The minister who graduated as a professional teacher slightly had a sojourn in his career spanning decades when he briefly led the personnel management of Marere (in former Somalia) hence had a short stint at the US Embassy before migrating to Canada.

Upon his arrival back in to the country slightly more than a couple of years ago he helped run Kafi Institute, an elite academy in the city, until he was just appointed to the newly established education commission and immediately after a minister to head the education docket.