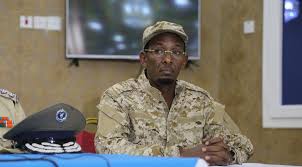 MOGADISHU–Former Somalia’s Intelligence Chief, Abdilahi Sanbalashe ,has said that he is apologetic for his role in the rendition of Ogadenia National Front official ,Abdikarim Muse alias Qalbi Dhagah, to Ethiopia in 2017.

He called upon the government to remove the group from the list of designated terrorist groups in the country.

Sanbalooshe who served in president Farmajo’s regime as the head of Somali Intelligence known as NISA in early 2017. He said the decision to hand over Qalbi Dhagah to Ethiopia was wrong.

His remarks followed an interview recently in which the Upper House Speaker, Abdi Hashi said Sanbalooshe  convened a meeting in which he was with President Mohamed Abdilahi Farmajo in 2017 and Qalbi Dhagah, a former soldier of national army of Somalia was to be handed over to Ethiopia to make peace with the government.

He urged the incumbent Somali president and PM to convene a cabinet meeting to remove ONLF from the list of terra organizations and invite Qalbi Dhagah and ONLF to Mogadishu to apologize to them.

A cabinet resolve in August 2017 that ONLF was a terrorist organization and declared Qalbi Dhagah a terrorist but the Federal parliament through a resolution announced Qalbi Dhagah’s rendition a violation of the constitution and that of Somali citizen.