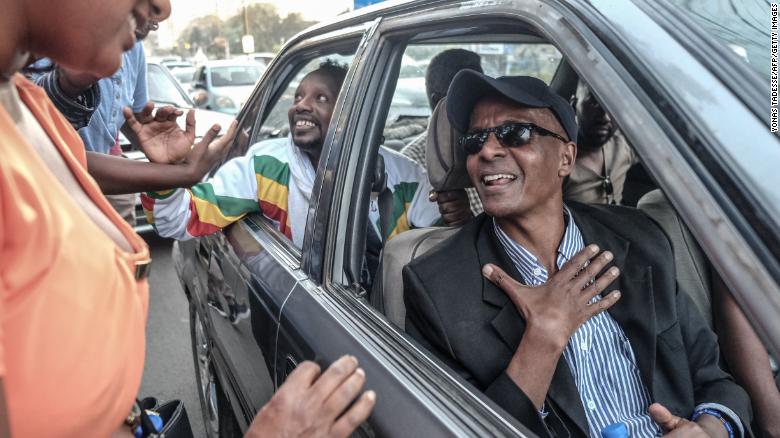 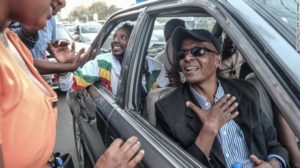 Ethiopian jounalist Eskinder Nega reacts upon his release from Kaliti Prison in Addis Ababa on February 14. The election of Prime Minister Abiy Ahmed in April made him comfortable about returning home from the US.

London, England–On a recent Tuesday night, nearly every table was occupied at Harar, a small Ethiopian restaurant in Vauxhall in South London.

Most of the clientele were Ethiopian, eating the flatbread called injera and drinking either coffee or tej, a traditional honey wine. The restaurant was redolent of frankincense, burned as part of an Ethiopian coffee ceremony.
“I miss everything about Ethiopia. My family, the traditional food, the coffee ceremonies, the festivals, Easter and Christmas,” said Alex Abraham, who sought asylum in the UK 10 years ago. His half-Ethiopian, half-Eritrean heritage made staying at home dangerous. He now works as a taxi driver in London.
But things are changing back at home. Since Ethiopian Prime Minister Abiy Ahmed assumed office in April, he has taken radical steps toward transforming the country. Ethiopia has been in and out of a state of emergency in recent years, and at war with Eritrea for 20 years. 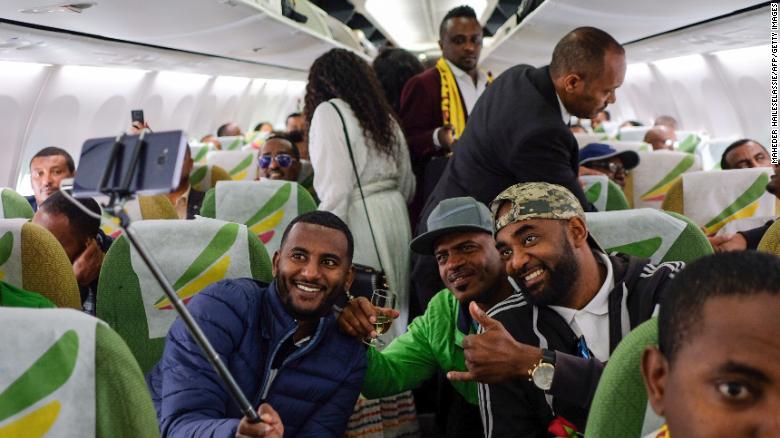 Passengers pose for a selfie inside an Ethiopian Airlines flight from Addis Ababa, Ethiopia, to Eritrea’s capital Asmara on July 18. It was the first commercial flight from Ethiopia to Eritrea in two decades.
Since the 1980s, Ethiopians have been fleeing the country. First from the violent Derg dictatorship that deposed Haile Selassie, and then from the increasingly authoritarian Federal Democratic Republic. The quashing of opposition and alleged human-rights abuses led to a rise in Ethiopians applying for refugee status — 37,014 applied globally in 2016.
But in just a few months the new Prime Minister has made policy changes many Ethiopians never dreamed of seeing in their lifetimes. This has included the release of tens of thousands of political prisoners and an end to the country’s war with Eritrea.
“The change is really magnificent; it’s great because there is reconciliation between the two countries,” Abraham told CNN. “I’m planning to go back to Ethiopia for good in one or two years’ time. I have to see the change, whether the peace and tranquility lasts,” he said, finishing his injera plate. 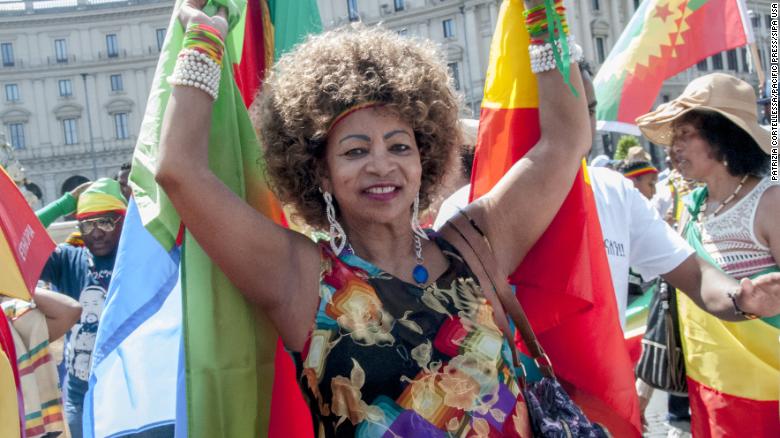 People in Ethiopia are calling strangers in Eritrea as phone lines are opened after 20 years
Such sentiments extend beyond the UK, Legesse Geremew Haile, deputy head of mission at the Ethiopian Embassy in Ottawa, told CNN.
“Our communities across the globe in general and in Canada, in particular, are content with the changes that are taking place in Ethiopia and have shown strong interest not only to visit their country but also to engage in investment and support their people in different ways.”
He added that a clear indication of this interest has been the “constant phone calls and dozens of emails” the Embassy has been receiving from diaspora members in Canada following Abiy’s reforms.

Reforms have brought a new wave of optimism in the country and among its diaspora — there’s even a hashtag, Abiymania. Over the past month Ethiopians have gathered at celebration rallies in honor of Abiy Ahmed in London and Washington, and during his “diaspora tour” of the United States this week, vast crowds gathered at Minnesota’s Target Center hoping to catch a glimpse of the man of the hour. 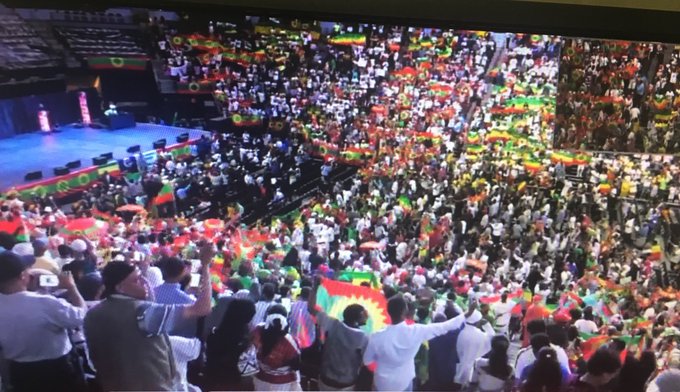 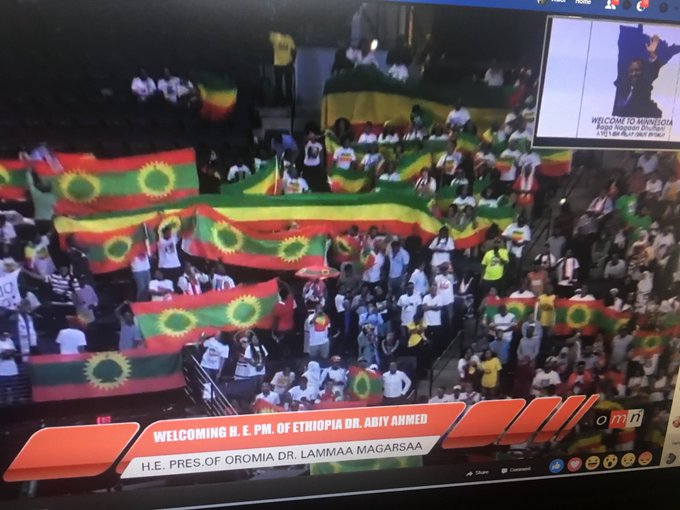 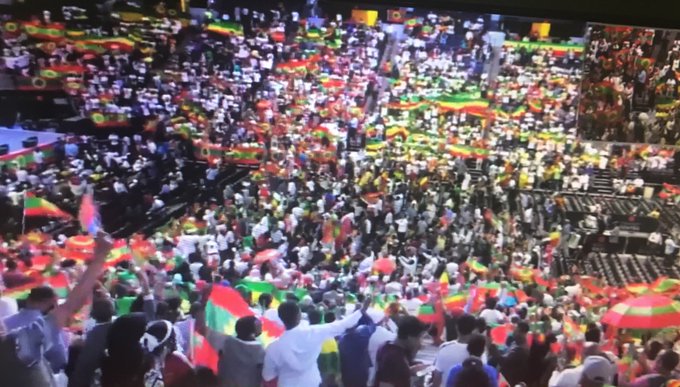 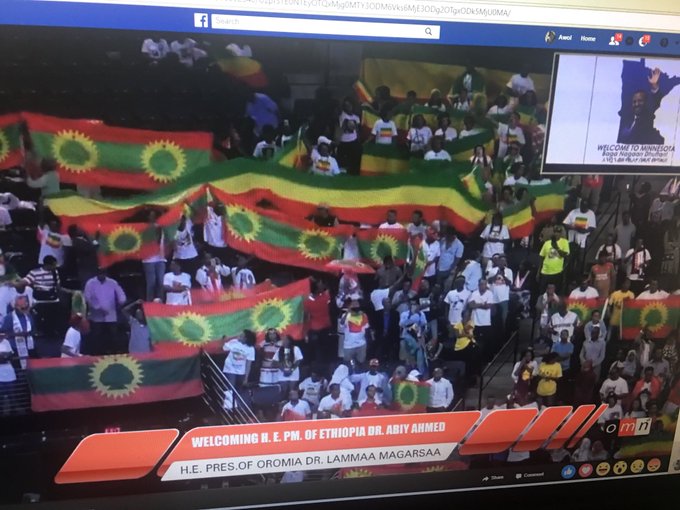 So proud of Minnesota (aka little Oromia) right now. Thus far, it is looking like a showpiece of diversity, inclusion, and tolerance. I hope it ends that way – as an outstanding example of the type.

And a visit to the London restaurant makes it clear that from journalists to business people, the changes in Ethiopia are prompting exiles to think about going home.
Mimi Haile, another customer, came to the UK over 20 years ago to study. When she got a job after graduating, she decided to stay.
“I knew if I went back I wouldn’t find a job and my education would be wasted. At the time the Ethiopian government was not good, and if you wanted a job, you had to know someone, and you had to agree with the politics,” Haile told CNN. 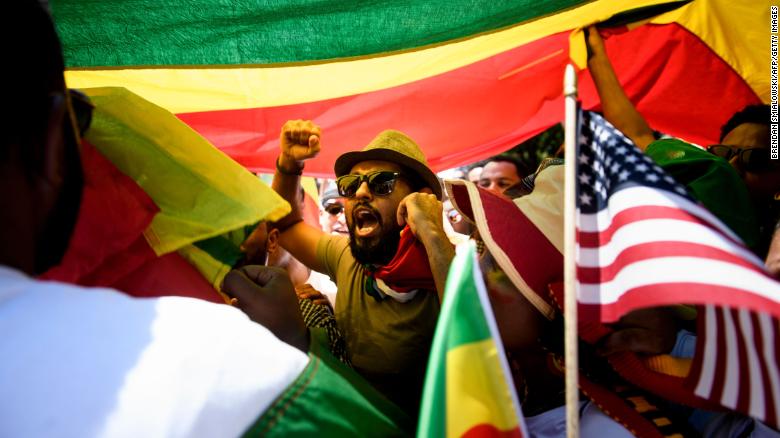 Supporters of Ethiopia’s Prime Minister Abiy Ahmed rally for US support outside the State Department on June 26.
But a return home is now on the horizon, she said, once her adolescent children are of age. “The way he [Abiy] speaks to people is very respectful, and he released those people who were in prison because of politics. There are big changes coming. I’m very hopeful,” she said.
The desire to go to Ethiopia isn’t confined to people who have actually lived there, extending also to some second-generation Ethiopians who have spent their lives elsewhere.
Lamia Naji, an international development consultant, was brought up by Ethiopian parents in Canada who migrated to pursue economic opportunity. The family made only one trip back to Ethiopia while Naji was growing up, but she has since traveled there with work.
“I am intrigued by the potential opportunity to apply my skills, and contribute my passion, in a country where my parents and grandparents call home,” she told CNN in an email. “I considered it before, but these considerations have been renewed with the new PM, especially with respect to his privatization announcements.”
Among Abiy’s reforms is the partial privatization of state-owned companies. This includes Ethiopian Airlines — Africa’s most profitable airline — and Ethio Telecom. The latter move brings an end to the country’s telecoms monopoly, which has enabled previous governments to restrict internet and phone connections nationwide.

Returnees have the potential to positively contribute to the Ethiopian economy, bringing in “much-needed foreign currency, business experience and dynamism,” according to Awol Allo, an Ethiopian economist based at Keele University in the UK.
Allo told CNN that remittances from the roughly four million people who make up the Ethiopian diaspora are worth more to the country’s economy than coffee, its top source of export revenue.
Some formerly exiled or imprisoned Ethiopian journalists and activists have already returned to the country, with cautious optimism. The exiled patriarch of the Ethiopian Orthodox Church, Bishop Merkorios, went back to the country on Wednesday. 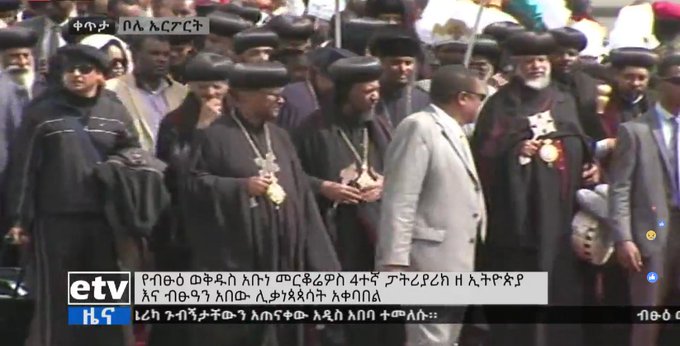 Historic moment as Abune Merkorios, the 4th Patriarch of the #Ethiopian Orthodox Tewahedo Church, arrived home after 27 yrs in exile. The Patriarch was deposed in what is believed to be a politically motivated decision which split the largest Church to be led by two rival synods

Twitter Ads info and privacy
Mohammed Ademo, founder and editor of OPride.com — a website focusing on news related to Oromo, an ethnic group that has been oppressed by the Ethiopian government — left Ethiopia for the US in 2002, when he was in his early 20s.
In an opinion piece for Al Jazeera about his return, he expressed concern about hardliners remaining in government who “have been accused of instigating ethnic tensions and economic sabotages,” and said he is unclear what the sudden privatization U-turn will mean for the country. 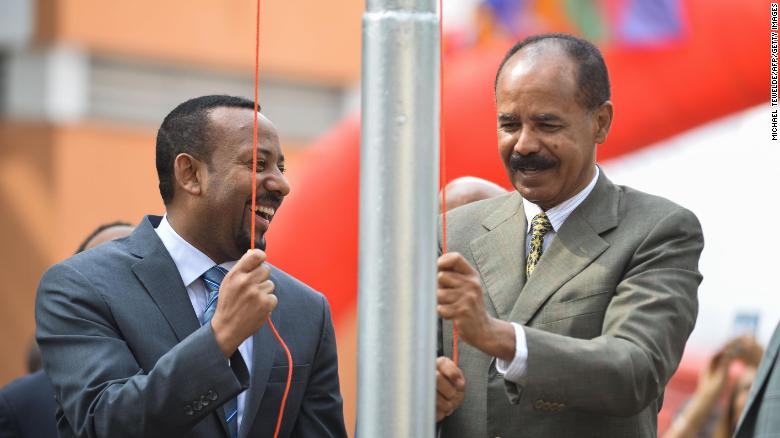 Ethiopian Prime Minister Abiy Ahmed (left) and Eritrean President Isaias Afwerki celebrate the reopening of the Embassy of Eritrea in in Addis Ababa on July 16, the latest in a series of dizzying peace moves after two decades of war between the neighbors.
But his words of hope are stronger than his words of warning: “I am anxious to see my mother and other family members for the first time after such a long absence… I am buoyed by the irresistible sense of hope and the positive change sweeping through my country. I look forward to bearing witness to these changes.”
Eskinder Nega is a renowned journalist and activist who was sentenced to 18 years in prison in 2012. After being among the roughly 6,000 prisoners freed at the start of 2018 to quell unrest, Nega flew to the US to see his wife and child for the first time in over four years. But the new hope prompted by Abiy’s election drew him back to Addis Ababa, Ethiopia’s capital.
“I opened an office on Friday. Incredibly, I actually found landlords who were not frightened to rent me office space,” Nega told CNN. But he too acknowledges that the country has a long way to go.
“I return to work despite the refusal of the government to share power with the opposition in a transitional government,” he said, adding: “Unfortunately the risks are still too high for my family to return from the US.”
Nega’s cautiousness is not unfounded: in June an explosion at a rally in Addis Ababa attended by the Prime Minister killed at least two people and injuring 100.

The optimistic buzz in the air at Harar restaurant continued right up until it closed for the night.
Michael Daniel, a mechanical engineer, currently working as a taxi driver, was sitting with a large group of Ethiopians young and old, all crowded around one table. They drank and chatted animatedly in Amharic, the official language of their homeland.
Away from the group, he told CNN about why he and his extended family are planning to return to Ethiopia in the coming months.”There are so many places to visit there which I never saw when I was young,” Daniel said, eyes wide. “I’m 52 years old now. I think it’s time for me to go and see what’s going on.”
He left the country for political reasons when he was 30. “For the last 27 years we have been ruled by one government and one tribe,” Daniel told CNN. “If you’re their tribe or their supporters, you can do what you like. But if you say something against them, there will be consequences.”
But for Daniel — and many other members of the diaspora — that sort of mentality has no place in what they see as their new, united Ethiopia. Asked what ethnic group he belongs to, his answer is pointed.
“I am Amhara, but I don’t believe in that. I am Ethiopian.”