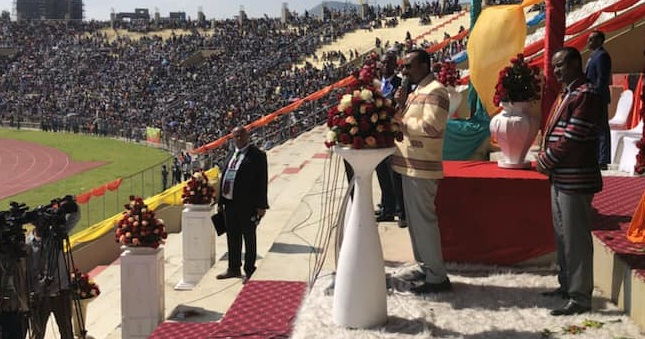 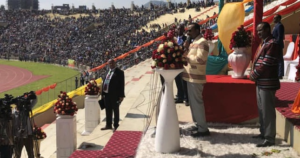 Hawassa October 06/2018 Chairperson of Ethiopian Peoples’ Revolutionary Democratic Front (EPRDF) Abiy Ahmed called on the entire people of Ethiopia to work with the front and the government to ensure sustained peace in the country.

Addressing the rally organized in connection with the successful conclusion of the 11th Organizational Congress of the EPRDF in Hawassa, Abiy stressed the need for collective approach to effectively ascertain the rule of law.

He underscored the importance of cooperation among competing and the ruling parties to work for the unity and integrity of the country, and ascertain the peaceful development of the country.

Abiy said the 11th EPRDF congress has put directions to revise principles, laws and regulations that are not suitable for the reform the country is undertaking.

He also noted that the government will play a lion’s share to make the next election democratic and credible.

The Congress has therefore decided to improve the leadership and operational capabilities of the National Electoral Board of Ethiopia and Human Rights Commission as well as other institutions, Abiy added.

With regard to expanding tourism, he urged the concerned organizations and the public at large to work hard and make the country a favorite tourist destination.

The Chairperson finally expressed deep satisfaction with the successful deliberation of the 11th Organizational Congress of EPRDF.

Abiy thanked the front for giving him second chance to serve his people and country; and reassured that he would carry out his duties with full accountability and responsibility.