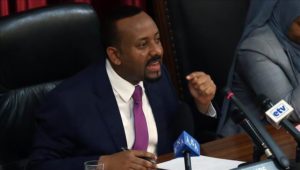 WASHINGTON–Ethiopian Prime Minister Abiy Ahmed on Saturday called for unity among members of the Ethiopian diaspora living in Washington, D.C.

His remarks came during his address to thousands of members of Ethiopian diaspora community at Walter E. Washington Convention Center. Almost 300,000 Ethiopians live in Washington, D.C.

Hailing the diaspora members as “global ambassadors” of his country, Ahmed said: “We come to you not because of our immediate needs. It’s because you’re integral to our identity, our renewal, our democracy, our growth.”

Ahmed also urged his community members to invest in Ethiopia.

In her address to the crowd, D.C. Mayor Muriel E. Bowser declared July 28 as “Ethiopia Day”.

On Friday, as part of his talks, Ahmed met the U.S. Vice President Mike Pence at the White House.