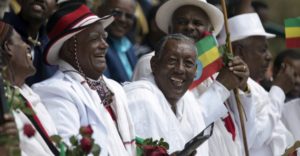 Ethiopia’s government has signed an agreement to end hostilities with the Oromo Liberation Front, which it had previously declared a terrorist movement, state television reported on Tuesday.

The deal appeared another step in a drive by Prime Minister Abiy Ahmed to improve security and diplomatic relations, reform institutions and open parts of the state-controlled economy.

Since the 1970s, the rebels have fought a low-level insurgency for self-determination for the Oromiya region, which is Ethiopia’s largest and home to the Oromo ethnic group.

The OLF was initially part of a transitional government set up in 1991 by rebels from the EPRDF coalition who had driven Mengistu Haile Mariam from power, but they soon fell out with the coalition.

On Tuesday, the government signed a reconciliation agreement to end hostilities with the OLF’s exiled leader Dawud Ibsa, who lives in exile in Asmara, the capital of neighbouring Eritrea, said Eritrea’s Information Minister Yemane Gebremeskel.

“The agreement further states that … the OLF will conduct its political activities in Ethiopia through peaceful means,” he said on Twitter. The deal was signed in Asmara.

The group declared a unilateral ceasefire last month after parliament removed it from a list of banned terrorist groups that it had been part of since 2008.

Abiy took office in April and his reforms have included extending an olive branch to dissidents overseas.

He has also acknowledged abuses by security services and ended a military stalemate with Eritrea that followed a 1998-2000 border war in which 80,000 people are thought to have died.