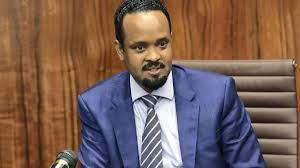 The Ethiopian delegation visiting Somaliland has returned back to Addis Ababa without any public statement on activities.

The high powered delegation dispatched by PM Abiy Ahmed last Wednesday was led his finance minister Ahmed Shide while the rest of the team remains anonymous, though grapevines have it that it included a couple other minister.

The delegation is said to have returned to Addis Ababa last Thursday after a spending a night in Hargeisa from where Geeska Afrika sources reveal that they met with Somaliland president Muse Bihi Abdi and some members of his inner cabinet.

The sources indicate that discussions revolved around the Berbera port currently under a 422USD management contract to DP World firm of the UAE.

Since PM Abiy came to office a slack in relations has ensued between Somaliland  and Ethiopia thus even touching on the Berbera port in which Ethiopia has a stake of  19% shares while , the UAE 15% and Somaliland retaining the balance.

Also reportedly discussed was the ongoing construction of the Berbera corridor road that connects the Somaliland port to landlocked Ethiopia as well as negotiations on cross border goods movement and taxation.

During the 33rd summit of the AU held in Addis Ababa early this month the Ethiopian PM organized in the sidelines a first face to face meet between the Somaliland president and his Somalia counterpart Mohamed Abdilahi Farmajo.

While the meeting was held in camera what is public is that the Ethiopian premiere immediately flew to Dubai where he held talks with UAE top honchos presumably on issues related to the Berbera port whose managing agency DP World is owned by the Emiratis.

On the other hand the meeting between presidents Bihi and Farmajo having elicited much debate in the two formerly united countries was followed by two shocking announcements all emanating from Farmajo in Mogadishu.

First was his apology the first by any Somalia leader to Somaliland citizens as pertains the atrocities committed by Siyad Barre during the civil war of the 80s and early 90s.

The latter elicited so much acrimony forcing president Behi to categorically refuse to host his Somalia counterpart during his annual state of the nation address in which he also acknowledged the genocide atrocities.