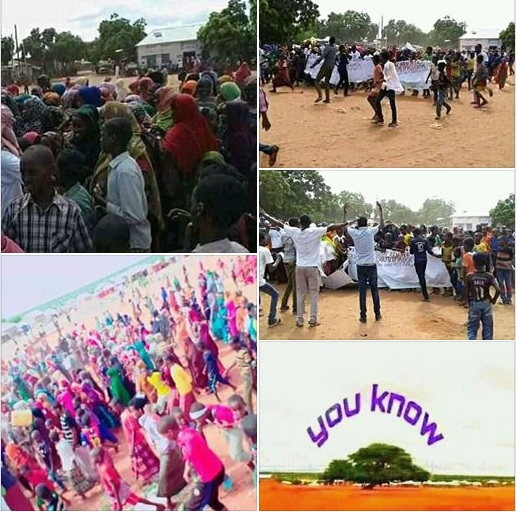 Rallies against the Somali Regional State President Mustafa Agjar continue for a sixth consecutive day in a number of Eastern cities of Ogaden, including Yu’ub,Lehelow, Garlogube, Danot,Wafdug, Daratole,Warder and the following an appointment of a former human rights abuser for the Governor of Doollo province.
Protesters chanted, “Agjar Down”— in a reference to the SRS president Mustafa Muhumed Omer and other slogans condemning the self-styled gangsterial’ rule.
Social Media activists from Doollo Province shared pictures from the protesters wearing Anti- Agjar T-shirts.
At least 60 people who have demanded that the people who were behind the cruelty over the last 10-years had to be put to justice have been detained by the administration, according to activist Sultan Tarah Jalal.
The protests in the impoverished Doollo Province is one of the last of many other protests that continued in the Eastern parts of Ogaden.
Protesters believe the administration is promoting criminals committed human rights atrocities in Doh and Doollo regions for the last 10 years. They say one of them is the newly-appointed Governor of Doollo Province Abdinasir Mohamed, who was part of the former administration in Jigjiga.