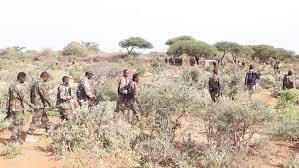 President of Ethiopia’s Somali region Mustafe Agjar said on Wednesday that authorities were planning to annex parts of Somalia to create a “security buffer zone” aimed at countering Al-Shabaab attacks.

The comments came following reports that Islamist insurgents had crossed over the border into Ethiopia to launch an offensive against Ethiopian troops stationed in regions close to the border with Somalia.

Speaking to VOA Amharic a day earlier, Mustafe linked Al-Shabaab offensive to tensions simmering between Ethiopia and Egypt over the filling of the GERD, adding that the attacks have something to do with a recent power shift in Somalia. He has not given evidence for his assertions.

Regional authorities earlier claimed that a military operation to end insurgent attacks in the region had been successfully concluded despite reports that clashes were still taking place inside the Somali region of Ethiopia. A Nairobi-based think-tank has recently reported that militants “penetrated as far as 100 kilometers inside Ethiopia and may still be active.”