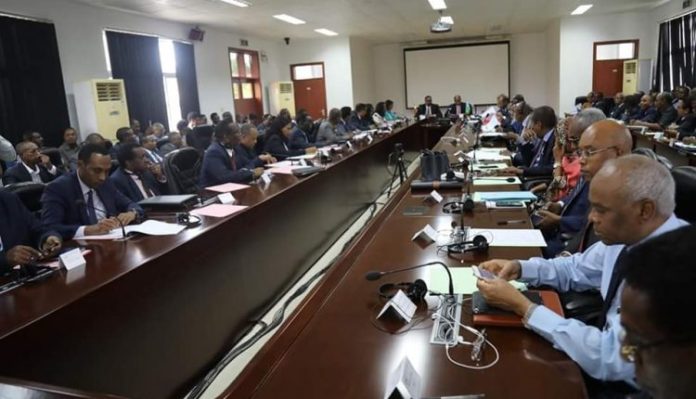 Dr. Workneh recalled that the people of Ethiopia and Djibouti are one people living in two countries intertwined with culture, religion, language, tradition, and history.

The Minister noted the 15th JMC meeting is yet another expression of our commitment to nurture the all rounded cooperation existing between the two countries.

The Foreign Minister noted the two countries have a very good track record of working on the issues of combating common security challenges such as terrorism and extremism under the umbrella of IGAD.

Dr. Workneh called for the need to scale up collective endeavors to consolidate the emerging peace and stability in the region.

Standard Gauge Railway (SGR), the clean and cheap electricity supply of electricity to Djibouti, Djibouti’s modern port facility, the plan to linkup through pipelines for transportation of natural gas from Ethiopia are among the few symbolic cooperation arrays between the two countries.

Praising the Government of Djibouti for taking steps to see improved relations with Eritrea, Dr Workneh noted that the President has been a good catalyst in further spurring a wind of hope within the region.

Reminding the number of cooperative agreements inked by the two countries, Dr. Workneh urged the need to expedite the implementation of these agreements to further heighten the ties to a high gear.

Foreign Minister of Djibouti Mahmoud Ali Youssuf on his part noted the ties between the two countries have always been in the spirit of the unique brotherly bond of their people.

The Foreign Minister added the Ethio-Djibouti relation is a showcase of regional integration in materializing the Agenda 2063 of the African Union.

Commending the bold and incisive decisions of Prime Minister Dr Abiy towards ensuring peace and harmonization in the region, the Minister expressed his Government’s deep-seated commitment to stand alongside its Ethiopian counterpart to spearhead the paradigm shift in the region.

As an essential prelude to the JMC, the Joint Technical Committee of the two countries was deliberating on matters of technicalities over the last 3 days, according to Office of the Prime Minister.

The meeting is expected to prompt enhanced platforms to scale up the ties between the two countries in multifaceted arrays including peace and security, socio-political, economic as well as people-to-people relations.