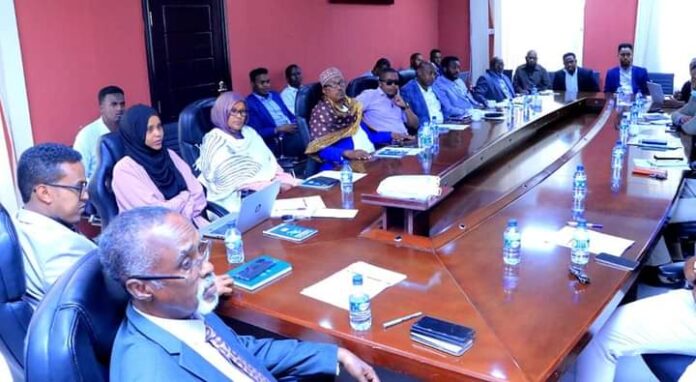 The aim of the meeting was to expedite the Acceleration and Coordination of Mineral Operations and the sustainable development of the mining and minerals industry in accordance with national minerals policy,

First of all, the Director-General of the Ministry, Mr. Mukhtar Mohamed Ali, thanked the participants and especially the mining companies for their good response to the invitation of the Ministry.

The Minister of Energy and Minerals, Hon. Abdillahi Farah Abdi, who officially opened the meeting in his opening remarks gave in-depth details of the country’s mineral history and the Ministry’s mining plan.

Afterward, members of the various Mining Companies operating in the country in their remarks thanked the Ministry and praised the Ministry for its hard work and dedication.

On their part, representatives of the mining companies asked questions relating to the challenges they face while doing their work.

The meeting was concluded by the Director-General of the Ministry, Mr. Mukhtar Mohamed Ali, who thanked the representatives of the mining companies for their good working relationship with the Ministry of Energy and Minerals.