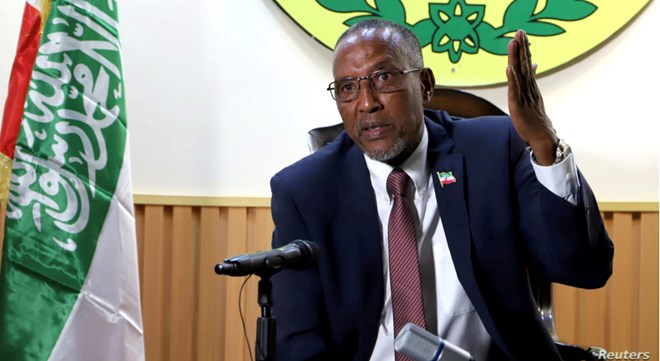 NAIROBI – As Somalia and the self-declared republic of Somaliland head toward elections, conflict experts are calling on both sides not to let politics disrupt progress in recent talks.

The two sides disagree on the status of Somaliland, which declared independence from Mogadishu in 1991.

The meeting in Djibouti was the first time Somalia’s and Somaliland’s presidents had met since 1991, when the Somali government collapsed and Somaliland declared its independence. Somaliland is not recognized by any country.

The agreement reached in June not to politicize aid and investment was another first between the sides.

However, both Somalia and Somaliland are scheduled to have elections in coming months, and analysts suspect that will hold up any further negotiations.

“I think Mogadishu will be quite distracted in the next few months,” said Omar Mahmood, a senior analyst on Somalia at the International Crisis Group. “To what degree can the current government engage at a deep level, given that they have a few months remaining on this mandate?”

Last month, the Somali parliament voted out Prime Minister Hassan Ali Khaire for failing to secure general election and national security. Since then, the technical team that is supposed to follow up on the Djibouti talks has not held any meetings, according to a member of the team from Mogadishu who was not authorized to speak to the media.

Mahmood says it’s hoped that Somalia and Somaliland can still discuss issues that can be achieved in the short term.

“That’s international assistance and humanitarian aid, and basically how they share that, and also security, security cooperation, the battle against al-Shabab,” he said. “They have already outlined these various specific topics, and they are supposed to have a sort of subcommittee meeting on those.”

However, there appears to be no change in Somalia’s stance that Somaliland is not an independent country.

Faisal Ali Warabe, an opposition politician in Somaliland, says there is nothing to talk about with Somalia.

“We will think about engaging Somalia in the future, knowing well there is no government,” he said.

He says Somalia is a divided country, with five presidents and five states. “Since we have our country, there is no war between us, and they have no power over us. It was a mistake to engage them,” Warabe said.

The people of Somaliland accused Somalia’s government of committing widespread abuses against them during the government of Mohamed Siad Barre in the 1980s.

Still, the two sides have agreed to continue with the engagement, in hopes of finding a solution to their political and historical differences.