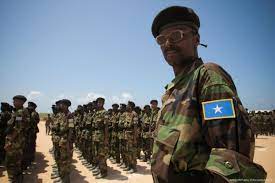 Egypt has begun recruiting thousands of soldiers in Somalia in a project funded by the United Arab Emirates amid an escalating power struggle with Ethiopia in the Horn of Africa.

Egyptian and UAE military and intelligence officials have been flocking to Mogadishu over the past weeks with an intention to sign up thousands of Somali recruits, who would then be transferred to Egypt for a military training.

The first batch of about 1200 recruits, who have been signed up secretly through Somali intermediaries, travelled to Egypt last week.

Egyptian and Emirati officials want to hit a recruitment goal of 8,000 soldiers within weeks.

In 2018, Somali authorities disbanded a loathed UAE-trained army faction for advancing foreign interests and an Emirati military base in Mogadishu was ordered to close. Many analysts said at the time the move was made due to bitter rivalries between Gulf Arab nations.

Since President Hassan Sheikh Mohamud won re-election in May, completion between Egypt and Ethiopia for influence in the Somali politics has been visible, but his decision to visit Cairo and discuss the GERD dispute with el-Sisi irked the Ethiopian leader Abiy Ahmed.

Though Somali officials have yet kept the recruitment process secret, many believe that the soldiers, after completing training, will be used as Egyptian and Emirati proxies to advance both countries’ interests at home.

Cairo is hell-bent on reviving its influence in the Horn of Africa to counter Ethiopia’s strategy of courting its historical allies, including Somalia. Ethiopia, however, has thousands of troops in Somalia under the African Union peacekeeping mission there. Presence of two hostile forces in a war-torn nation itself may add tinder to the decades-long conflict in Somalia, according to analysts.

Egypt has long been seeking a presence in Somalia. Now, authorities in Mogadishu have given land to Egyptians near a seaside Turkish base, where Egypt will build its first military camp in the Somali soil. For many, that will only leave the war-ravaged nation open to a perennial risk of becoming a battleground in a proxy war.

During his days in the ranks of opposition against his predecessor Mohamed Abdullahi Farmajo, Mohamud proved a powerful voice against clandestine training of soldiers in foreign countries. In 2021, he said thousands of troops clandestinely transferred to Eritrea for training had been sold and were thrown into the war in the northern Ethiopian region of Tigray.

Transparency in government’s dealings with foreign countries and contracts was among the key campaign promises made by Mohamud ahead of his election this year.

Somalia has long been a victim of rivalries between Gulf Arab nations. Over the past five years, Qatar and the UAE have been vying for influence in the country, with each offering guns and large sums of cash to Somali authorities to defeat the other in the Somali domain.

In 2018, for example, Qatar forced Somali authorities to seize large sums of cash from the UAE at Mogadishu Airport and the following closure of a military base run by Abu Dhabi.

Following the defeat of Farmajo in recent elections, the UAE has breathed a sigh of relief and is making a comeback in the Somali arena. It is planning to reopen its base in Mogadishu and has called up dozens of Somali soldiers, who were part of military units it had trained and equipped.

UAE currently trains and equips thousands of soldiers in the northeastern semi-autonomous region of Puntland. It provides military and financial assistance to the separatist region of Somaliland.

The large-scale recruitment and transfer of Somali youths to Egypt is feared to pave the way for an unexpected emergence of opposition against Somali President Hassan Sheikh Mohamud’s administration, who during his days outside the presidential villa, opposed similar moves made by his predecessor.

Ethiopia has capacity to mobilize Somali regional states against Mohamud’s decisions to check the Egyptian diplomatic advance in Somalia. Addis Ababa has already invited some of the regional presidents to Addis Ababa, striking security deals while sidelining Mohamud’s administration.

Egyptian plans to build a military base in Somalia are aimed at advancing its own military and diplomatic interests, including pushing Ethiopia to allow its share of the Nile waters and stopping further development of the Grand Ethiopian Renaissance Dam.

Addis Ababa believes Egyptian military presence in one of its neighbors could be a major threat to the GERD, it has previously discouraged South Sudanese authorities from accepting Egyptian request for a military base.