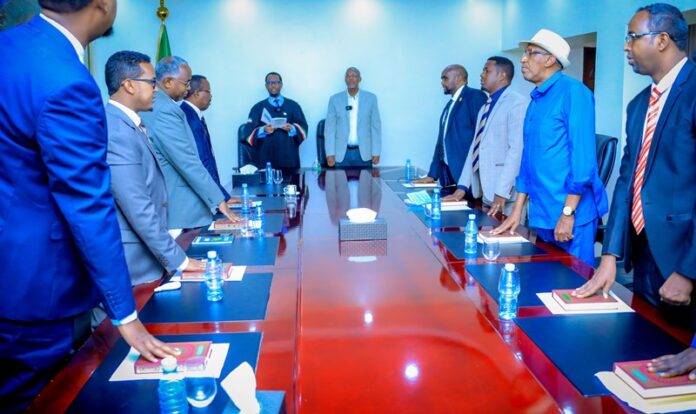 Somaliland President H.E Musa Bihi Abdi on Monday witnessed the swearing in of new ministers and deputy ministers as well as other government officials that the SL House of National Assembly recently passed after the President appointed them to assume the new roles in his administration.

The swearing in affecting 2 ministers and four deputy ministers as well as chairpersons of various institutions in Somaliland saw the Chief Justice Hon. Adam Haji Ali presiding over the ministers and other deputies to take the oath of office.

The Chief Justice urged the sworn in ministers as well as other gov’t officials to serve the nation diligently.

The Head of State has urged the sworn in officials to work diligently and be honest while serving for the public at large.

Agriculture minister and the minister of national planning among those who took oath of office during the ceremony held at the presidential palace.

Deputy Ministers of social and family affairs, information, animal husbandry and fish development, and public works, are among those who sworn in.