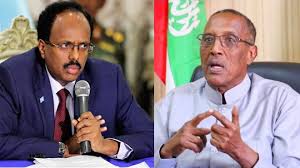 HARGEISA–The Swedish government in collaboration with the Center for Humanitarian Dialogue have embarked in a well coordinated efforts to pave the way for convincing the leaders of Somalia and Somaliland to the negotiation table in order to resume the stalled peace talks between the two regions. Somalia president, Mr. Mohamed Abdilahi Farmajo and Somaliland counterpart, Mr. Musa Bihi Abdi both have agreed to restart the derailed talks between the two sides. What remains as the bone of contention is the venue and the date fixed for the dialogue to recommence. The Somaliland president wants Sweden to host and be the venue of where Somalia and Somaliland talks to restart but his Somalian counterpart insists on that the talks to reopen in Djibouti. The Center for Humanitarian Dialogue is working hard to bridge the gap between the two leaders and to see the resumption of the derailed talks for quite some time. Former Somaliland foreign minister under president Silanyo’s administration is a senior officer of CHD and is working hard to bring the two leaders to restart the talks. The center for humanitarian dialogue is also doing its concerted efforts to resolve the differences between the two leaders and to get the ball rolling and see the resumption of the dialogue between Somaliland and Somalia. Turkish government also is willing to continue hosting the talks but the western governments the likes of USA and the UK are not in favor of the dialogue to commence in Turkey. The USA and the UK prefer the talks to take place in Sweden or in England.