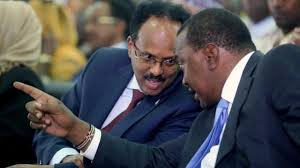 This followed Nairobi recently barring three Somali officials from attending a cross-border conflict management programme after they were refused visas by the Kenyan embassy in Mogadishu.

In response, an angry Mogadishu urged its officials to boycott the UN-Habitat Assembly held in Nairobi last week.

However, according to analysts the real underlying issues are competing economic and political interests as Western, Asian and Gulf powers scramble for the vast gas and oil deposits in the Indian Ocean triangle coveted by the two countries.

The deterioration in relations between the two neighbours can be traced to the ongoing maritime border dispute in the resource rich region of the Indian Ocean, a dispute which is currently before the International Court of Justice in The Hague, Netherlands.

The area in the Kenya-Somalia maritime border dispute is about 100,000km2, forming a triangle east of the Kenya coast.

At play are oil companies from the West – Norway, the US, UK, France, Netherlands and Italy – and the political divide in the Middle East that pits a group of countries led by Saudi Arabia and United Arab Emirates against those led by Qatar, jostling for an upper hand in Mogadishu, reported the East African.

This ongoing dispute has now conflagrated to bickering over bilateral and internal issues which are threatening the region, a situation exacerbated by Somalia’s instability and political volatility.