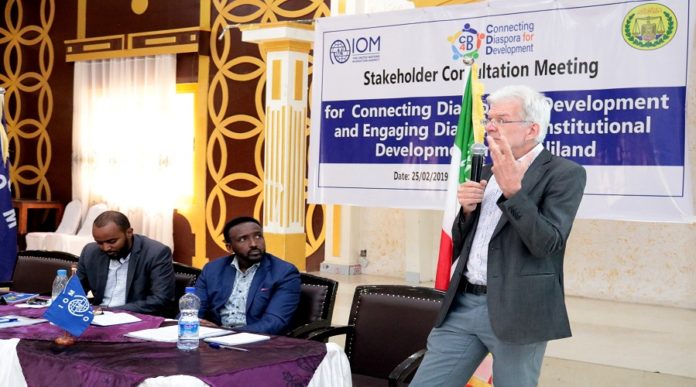 First, The Labor Mobility and Human Development Programme Officer Mr Saeed Guled has thanked the participants  of the meeting for their time and attendance. He has tanked also the head of the CD4D project  Mr Adri ZAGRS for maintaining  worthwhile collaboration and working relationship.

Mr Adri ZAGRS explained the expected objectives of this CD4D project, which included:

(a) to assess the current program implementation, identify challenges, sustainability and future improvements.

(b) To exchange and share knowledge and experience on the skill transfer best practices among project participants and institution focal points; through this, participants from other MIDA programs in Hargeisa.

(d) and finally to promote the positive contribution of Somali diaspora experts in the capacity building of government institutions in Somaliland through IOM’s MIDA program. Mr Adri ZAGRS has officially launched the opening of the meeting.

Mr Saeed mentioned that this project has close working relationship with the ministries of Interior Affairs, Agriculture, Livestock and Fisheries, Public Works, the Ministry of Council and Constitutional Affairs of somaliland and Hargeisa Municipality. Mr. Saeed indicated that the major aims of the project included , supporting those diaspora members who are voluntarily planning to return to thier homeland, where  they themselves (Diasposra) will contribute their knowledge and skills to their homeland and people. Mr. Saeed added that the meeting will review the benefits and challenges since this project has started.

Finally, the Director General of the Ministry of Council and Constitutional Affairs of somaliland, Mr Mohamed Hussein (Dhabeeye) has commended the IOM and the CD4D project. He mentioned that IOM is the only agency which its activities has made a positive impact in Somaliland. He has thanked for the Government of Netherlands for funding such a project and recommended for the continuation of this kind of projects.