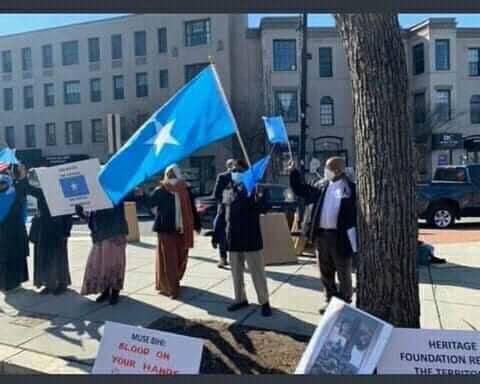 The emotionally-motivated demonstration in America failed with shame hovering above them. The dictatorship-obsessed people would like Somaliland to come back to the false union to bombard people and cities again by war planes taking off from the cities they bomb back for holding cruel tribal hatred. The month-long public appeal for holding demonstrations against the visit of president Muse Bihi Abdi to America failed for not attracting enough people. The organisers were trying to inject new blood to dead Somaliwein dream that has been under destruction since independence of 1960 by tribal brutal dictatorships. It is over for Somaliwein that has been used for tribal or personal interset, not for nationalistic and patriotic interest.

Because of dying Somaliwein, Somalia has been graciously giving chance to Somali stangers from other Somali territories in order to become members of the parliament and government of Somalia to govern and rule country that they do not belong to but they abused that chance for enriching themselves, being divisive elements turning Somalia’s tribes against one another for their interest, and even involved in corruption, crimes and injustice against the people of Somalia. Somaliwein is solely responsible for the current woes and crises in Somalia. The name Somaliwein has become passport of deception to enable Somali strangers get cabinet positions, legislative members, high government jobs or military ranks in another Somali territory where they do not belong to for personal enrichment and even commit crimes to protect their personal interest.

Somaliland people call on Mogadishu people to rid of Somaliwein and seize back their country, government and parliament like Somaliland and Djibouti to have peace, stability and progress. Even if DDS and North East Kenya become independent, they will never join other Somalis because of hateful tribalism and corrupt, tribal dictatorships. Somaliland people spearheaded Somaliwein in 1960 to establish great, powerful Somali nation in the Horn of Africa but they were betrayed by committing genocide, destruction and displacement against them in the hands of Somaliwein. Somaliwein is like Arabwein and both dreams officially failed because of chronic tribalism. Somalia is still victim of Somaliwein while Somaliland was victim of it for the 30 years of the disastrous union. Somalis turn swords against one another instead turning them against their common enemies and their puppets in the Horn of Africa. They destroyed Somaliwein with selfish tribalism and, at the same time, they speak for it which is the height of hypocrisy.

Somalis possess destructive characteristic called tribalism for being tribalistic-hardened nomadic people who can not distinguish tribally owned water-well and grazing area from public, nation-wide owned government. They are not visionary people for bettter future. They forget the past, focus on the present for personal and tribal interest and lack future vision. Somalis will never be great people until the leaders are elected for their visionary ideas, not for corrupt tribalistic affiliations.