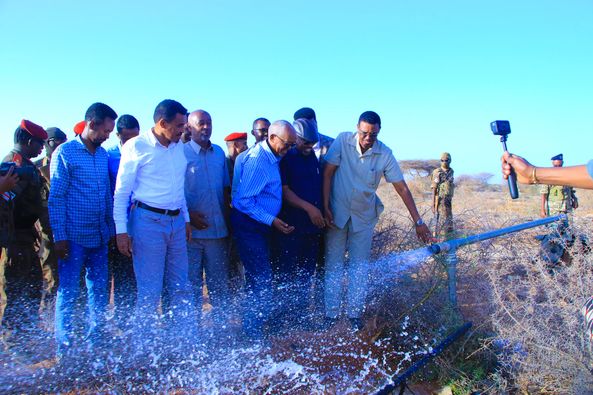 The Vice President of the Republic of Somaliland, and Chairman of the National Drought Relief Committee, Mr. Abdirahman Abdillahi Ismail (Saylici) and a delegation led by him on a working visit to the eastern regions of the country, handed over Togdher Governor a donation of 536 water trucking, for the drought affected people in Togher region.

VP Saylici and his entourage, members of the committee, NADFOR Chairman Faisal A Sheikh, Minister of Water Ali H. Mohamed, Minister of Environment Shugri H. Bandare inspected the Aroori range bank on the outskirts of Burao yesterday, prepared a well and a reservoir for drinking water for people and animals, also inspected boreholes set up by the government in Kabo-dheere area on the outskirts of Burao, where people and animals drink regularly.