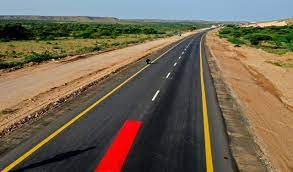 The commuters who ply the route and always use the road between Hargeisa and Gebilay thanked the government for the construction of the road, which has made life easier given the problems they faced in the past.

The construction of the road between Hargeisa and Gebilay was built jointly by the Government and the European Union.

As highlighted in a major TV programme “I Tus oo I Taabsi” (Show Me Tangibly) on Tuesday happy commuters depicted elation and profound happiness as they lauded the upgrading of the highway.

The programme recalled when the Head of State H.E. Muse Bihi laid the foundation stone for the construction of the 60km distance back in 2019 and had notably observed then, “The community wants service from us, and the query as to what the government has done will come such as ‘how many roads has the state built, how many road accidents have decreased’”.

This road, which has been in ruins for the last 30 years and has had commuters face countless hazards with untold numbers of fatal accidents, especially for lack of bridges.

Infrastructure, such as the construction of roads, boosts the economy in any setting anywhere. It is a main catalyst of development.