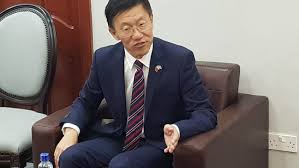 A Chinese delegation will arrive in Hargeisa, the capital of Somaliland on Wednesday (Today). The delegation has been dispatched from Beijing by the Chinese Ministry of Foreign Affairs after speculations were rife that Somaliland government is considering to formally recognize Taiwan and grant military facility.

Chinese ambassador to Somalia, Qin Jian, has been in Hargeisa since August 1st.

Somaliland’s FM is currently out of the country on trip to Turkey.

It is not yet clear if President Bihi who has shunned from having discussions with Qin Jian will meet with the high powered Chinese delegation from the ministry of foreign affairs.

Somaliland has dismissed with China’s attempts to discourage it from having diplomatic ties with Taiwan.

China and Somalia both criticized Taiwan for its efforts to advance ties with Somaliland back in July. The Somali government — which has diplomatic relations with China — condemned Taiwan for undermining Somalian sovereignty, while Beijing labeled the move by Taiwan as part of a separatist plot perpetrated by the ruling Democratic Progressive Party