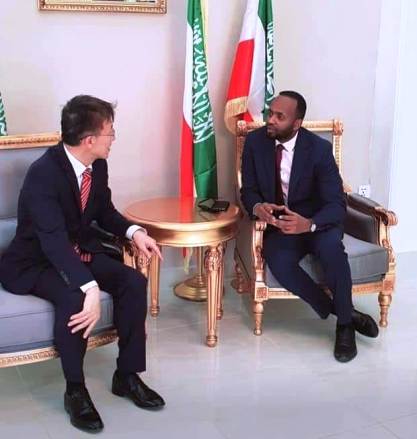 A high level delegation from China’s foreign affairs ministry had arrived in Hargeisa, Somaliland capital yesterday.A delegation from the African department to reinforce the DRC’s ambassador to Somalia, Qin Jian, who has been in Hargeisa since Saturday.The newly three officials arrived in Somaliland plus the envoy had been struggling to convince President Bihi to officially announce severing ties with Taiwan.Officials at the Ministry of Foreign Affairs have welcomed the three Chinese officials that came straight from Beijing. Somaliland and Taiwan had announced exchanging diplomatic offices last month.Taiwan’s FM Joseph Wu said in a statement on July 1st that the two governments had agreed to set up ties based on friendship and shared commitment to common values of freedom, justice & the rule of law.since then both countries appointed representatives that will be stationed at each others capital.China strongly denounced the ties as China’s embassy in Somalia condemned the move.China’s Foreign Ministry issued a statement stressing China’s sovereignty.China uses global power to cut of Taiwan’s diplomatic ties effectively reducing its relationship to 15 allies.China severs ties with countries that engage with Taiwan as move to isolate Taiwan.China cannot severe ties with Somaliland as it is not internationally recognized.The new relationship is a major breakthrough as Somaliland has reached out Taiwan for cooperation. It is reported that President Bihi met with Chinese delegation along with its envoy to Mogadishu but has rebuffed Chinese offers in order Somaliland to break off ties with Taiwan. Chinese officials offered a package of development projects including airport and roads construction projects. Chinese officials also pledged to open liaison office in Hargeisa.All Chinese officials attempts to convince president Bihi to cut ties with Taiwan ended in vain.