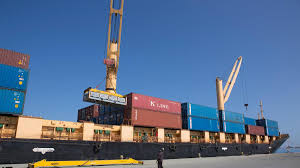 Somaliland targets over 30 percent of Ethiopian container cargo as construction work for the first phase expansion of the port of Berbera progresses halfway. The Port Authority says expansion should be completed by October 2021.
Berbera Corridor is a comprehensive engagement between Somaliland and Ethiopia. It allows for sea access, roads, telecom infrastructure and electricity led by a joint coordination committee.
The first phase consists of building a 400-meter quay and 250,000-square meter yard extension. It was awarded to Shafa Al Nahda. The port expansion will cost 442 million USD.
“The expansion process is going well as we are closely following the project, which will be completed on time,” General Manager of Somaliland Port Authority Said Abudilahi told a group of journalists adding that the contractor is very experienced.
Shafa Al Nahda has been involved in the Port of Dakar expansion in Senegal as well as the Port of Maputo expansion project in Mozambique.
DP World holds a 51 percent stake in Berbera Port, while Ethiopia holds 19 percent and Somaliland the rest.
“A port without a road is nothing so we are working side by side and struggle to complete the Barbera corridor comprehensive scheme with a road, all the way from Barbara toTogochale. “The General Manager said expressing his strong dedication for the road connectivity.
Still another UAE and the Abu Dhabi Fund for Development Construction the company are also building a 250-kilometer divided highway between the city of Berbera and the Ethiopian border town of Togochale which should be finished in May 2021.
The joint coordination committee (JCC) was formed at the ministerial level to deal with trade engagements and legal aspects. As the expansion goes on, the trenching activity will begin after 10 days to reach the international level of port facilities.
They have added another facility as well and a tugboat was already purchased last year that can push 50 thousand tons and they are bidding to purchase another tugboat.
All this is a push to increase the Port’s capacity and make it competitive with regional ports. The standards will be international and Berbera will be a gateway serving 20 at least thousand vessels per year.
The expansion includes a dry port, free trade zone, and oil banker. In 2021 they are preparing a mother vessel from China, Singapore or the USA and soon will begin transmission shipments and finishing the road and port expansion,” the manager said.
As soon as the first expansion work is completed, the 2nd phase will begin with a 269 million USD investment to build a 400-meter expansion project increasing the total capacity to 800 container terminals.
Currently, the port serves as the humanitarian hub for east Africa and the World Food Program and they charge minimal fees. It is not used much by commercial vessels.
“Lack of communication, mixing up Somaliland and Mogadishu (Somalia) and the poor infrastructure make Ethiopians reluctant to use the port,” adds the manager.
To this end, the Port Authority plans to have a forum to market trading with Somaliland and Port Berbera as soon as the Berbera corridor is competed.
The Berbera corridor project should be finished by May.
Concerning the legal issues, a joint committee from Ethiopia and Somaliland are working together on the issues of customs, taxation and legal matters.
In 2016, A Dubai based shipping firm, (DP) World won a 30-year concession with an automatic 10 year extension for the management and development of a multi-purpose project at Berbera Somaliland.