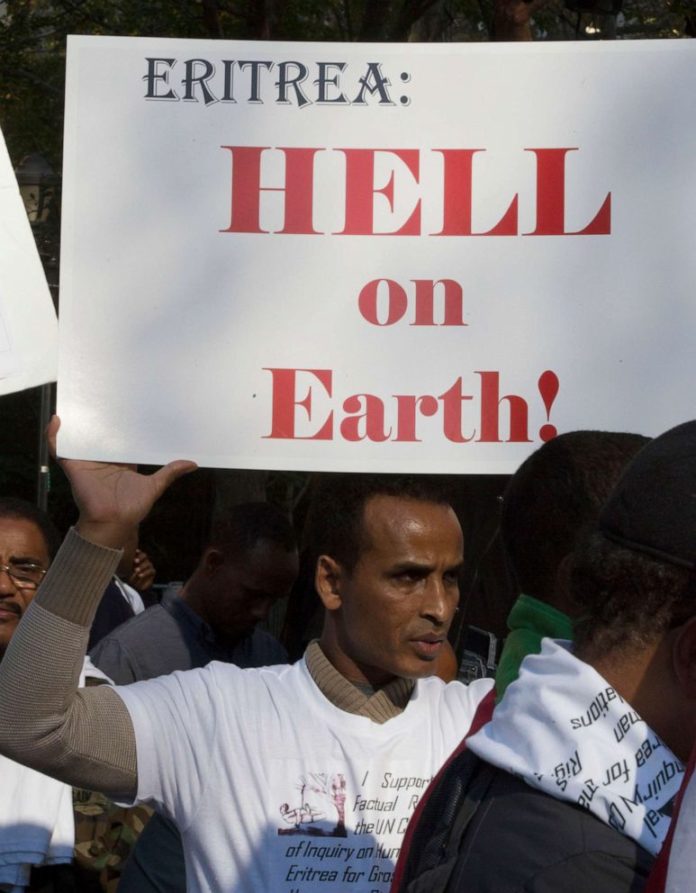 As the U.S. remains locked in a debate over asylum seekers from Central America, lawyers and advocacy groups say they are seeing an alarming uptick in deportations to the African nation of Eritrea — a country that President Donald Trump’s government acknowledges arbitrarily imprisons and tortures its own citizens.

Eritreans in the U.S. whose bids for asylum have been denied say they fear that deportations are akin to a death sentence, immigration attorneys told ABC News.

Zeresenay Ermias Testfatsion, a 34-year-old Eritrean whose asylum claim was rejected, was found dead last year in a shower area at a detention holding area during a layover at Cairo’s international airport en route to East Africa. U.S. Immigration and Customs Enforcement saidhis death was an “apparent suicide.”

“He explained to the U.S. government, if he gets deported, the Eritrean government will imprison him and torture him, all that kind of stuff,” his close friend in the Washington area, Tesfom Debesai, told ABC News. “If he went back to this country, something was going to happen to him.”

President Trump has primarily focused on migrants and asylum-seekers from Central America, which advocates say deflect attention from the plight of Africans and others seeking refuge in the United States.

“I think certainly on the ground, we see all the communities in our state and folks who we serve across the board … impacted by administration policies,” Tim Warden-Hertz, an attorney at the Northwest Immigrant Rights Project in Seattle, told ABC News

Eritrea’s authoritarian government tortures, forcibly disappears, and indefinitely detains its citizens, who lack an array of civil rights and freedoms, according to the State Department’s 2018 report on human rights in the country. Human rights groups say it also uses extortion and threats of violence to compel its nationals residing abroad to pay a 2% income tax before they can obtain basic services.

Nearly half a million Eritreans have fled in recent years, with many of them escaping indefinite military service that the United Nations has said amounts to mass enslavement, and tight restrictions on leaving. Some have made their way to ports of entry on the United States’ southern border with Mexico and claimed asylum — only to have American immigration courts deny them refuge.

Eritrea, which borders Ethiopia, Djibouti and Sudan in the Horn of Africa, has for years refused to provide U.S. immigration authorities with the documents needed to repatriate Eritreans, and those who are denied asylum can end up in a state of limbo.

To force Eritrea’s hand, in September 2017, the Department of Homeland Security announcedthat it would stop issuing a wide range of U.S. visas to Eritreans. Since then, the number of Eritreans deported has spiked by over 50%, an increase ICE has attributed to the heightened pressure.

The U.S. deported about 62 Eritreans in the year since the sanctions announcement, and an ICE spokesperson told ABC News that at least a dozen more people have been deported since October.

The America Team for Displaced Eritreans, an advocacy group, told ABC News that, over the years, it had tracked scores of cases of Eritreans fighting to stay in the United States. As of last month, there were 936 Eritreans in the U.S. who had been ordered deported but who were not detained, including 147 convicted criminals, according to an ICE official.

As the United States pushes to accelerate deportations, several immigration attorneys who work with Eritreans told ABC News that individuals who go before U.S. immigration judges without a legal assistance might struggle to counter claims that the human rights situation in their home country has improved. There is no guarantee to a lawyer in U.S. immigration courts.

“That is the climate that we are living in, especially under the Trump administration,” said one immigration attorney, who requested anonymity out of fear of reprisal from Eritrea. “I’m seeing just the craziest arguments being made — decisions, rulings that place people’s lives in danger.”

The brother of one Eritrean man facing deportation, who requested anonymity for fear of retaliation by Eritrean and American authorities, told ABC News that he worries that if his brother is forced to return home, he will never see him again.

His brother had been conscripted into the country’s notorious “national service” and was tortured repeatedly after refusing an order to shoot at someone who was trying to escape. He escaped across the border to Sudan and eventually made his way to a port of entry on the U.S.-Mexico border in 2016, but his asylum claim was later denied. He is now being held in ICE detention.

“In the past, he was going in and out… of the prison. And got tortured, got beaten up,” he said of his brother. “But this time, he will not make it out [of Eritrea] alive.”