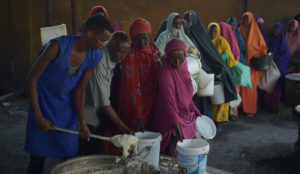 Mogadishu, 19 August 2018 – As the international community marked the World Humanitarian Day today, a senior United Nations official warned of the grave threats faced by aid workers in Somalia, where they continue to be targets of armed groups which often abduct and detain them and steal desperately needed relief supplies.

“As humanitarians deliver aid and medical workers treat the sick and wounded, they are directly targeted,” the UN Secretary-General’s Deputy Special Representative for Somalia and Humanitarian Coordinator, Peter de Clercq, said at a press briefing in the Somali capital.

“They are still facing threats and they are being prevented at times from bringing relief to those in desperate need – this must stop,” he added.

The UN official noted that 74 violent incidents affecting humanitarian personnel, health facilities and assets had been registered in the Horn of Africa country since the beginning of 2018. Seven humanitarian workers have died thus far this year and another ten have been injured.

Of the 18 humanitarian workers who have been kidnapped this year, six remain in the custody of their captors, including the German nurse Sonja Nientiet who was working with the International Committee of the Red Cross when she was abducted in the capital, Mogadishu, last May.

The Humanitarian Coordinator said that although the number of aid workers who have been targeted in 2018 is lower than the figure for last year, the practice remains a cause for concern.

Somalia’s federal government has vowed to take action to reduce the threats facing aid workers. “Our ministry will work on getting strong policies that protect the well-being of civilians, aid and health workers,” the federal Minister of Humanitarian Affairs and Disaster Management, Hamza Said Hamza, said at today’s event.

The plight of civilians caught up in humanitarian crises was also highlighted during the press briefing, with Internally Displaced Persons (IDPs) topping the list of priority cases.

The Mayor of Mogadishu and Governor of the Benadir Regional Administration, Abdirahman Omar Osman, estimates that the Somali capital and environs host at least 500,000 IDPs.

“Addressing displacement is a development issue for the Benadir Regional Administration. You cannot have a modern and forward-looking capital city with thousands displaced,” noted Mr. Osman, adding that Mogadishu needs to adopt an “an inclusive progressive agenda” to cope better with its IDP population.

While emphasizing the need for tangible solutions to reduce internal displacement, the Country Representative of the Office of the UN High Commissioner for Refugees, Caroline Van Buren, told the gathered journalists that 2.6 million Somalis have been displaced internally across the country.

“We welcome the commitments made by the (federal) government and regional governments to address the issue of evictions by issuing guidelines in line with international and regional standards,” remarked Ms. Van Buren.

In 2008, the UN designated August 19 as World Humanitarian Day to commemorate a suicide bomb attack on the UN offices in the Iraqi capital of Baghdad in 2003 which killed 22 people and injured many more.

The Day aims to pay tribute to aid workers who risk their lives in humanitarian service, and to rally support for people affected by crises around the world.