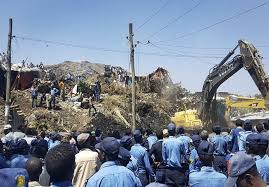 ADDIS ABABA, ETHIOPIA—The Ethiopian government has begun demolishing thousands of houses they say are illegal in the Oromia region in the outskirts of the capital, Addis Ababa.

The government said it intends to tear down 12,000 houses that were built illegally on government land, taking advantage of widespread unrest in the region over the past three years. But residents allege that they were paying taxes to the government on the properties.

“This house that I built with my entire saving is now gone,” said Mekdes Melu, whose home was among the nearly 500 that have been demolished so far. “What I’m supposed to do now? Where can I go with my family of four?”

The U.N. Special Rapporteur for Adequate Housing, Liliana Farha, said she is concerned about the planned demolition of the houses, in neighborhoods called Legetafo and Legedadi.

“The rapporteur will be investigating this issue and reminds all actors involved that forced evictions constitute an egregious violation of the right to housing,” she tweeted this week.

Jawar Mohammed, a prominent activist in Ethiopia, said it is because the government has not provided adequate housing that people build what are called ‘Moon Houses,’ houses built illegally overnight in the moonlight.

“It is irresponsible to demolish these houses now after sitting idle and watching when they were built. This is not securing law and order,” he wrote on Facebook on Friday.

But Ethiopian officials said the houses were built when the government administration of the areas was weak because of the widespread protests and it was not able to stop them.

“The areas were slated for greenery spaces, manufacturing hubs and various investment projects,” Addisu Arega, a senior official from the Oromia region, told The Associated Press. “Illegal houses were constructed even inside school compounds and on areas designated for road projects. We are now taking the land back and securing law and order. Everyone should know that this is something that is not up for discussion.”

“We are conducting various public housing projects that will benefit the poor. This includes support for those who can’t afford any shelter so that land will be made available somewhere else,” Addisu added.

Addis Ababa is growing rapidly and a city master plan that allegedly incorporates some land from the surrounding Oromia region, the largest among Ethiopia’s federal states, was one of the main causes for a wave of deadly anti-government protests that erupted four years ago. The protests led to the resignation of Prime Minister Hailemariam Desalegn which brought to power the current leader, Abiy Ahmed, who became prime minister in March, 2018.

Abiy, 42, is the first Oromo leader in modern Ethiopian history and conducted quick reforms that won praise both locally and internationally.

Ethiopia’s economy is the fastest growing in sub-Saharan Africa, with an estimated growth rate of 8 percent in 2018. The country has embarked on large-scale infrastructural projects including the construction of a massive dam on the Nile River and new road and rail projects. Addis Ababa airport has recently been expanded. Last Thursday, the government unveiled a grand plan to develop and carry out a $1 billion redevelopment of Addis Ababa’s riverside location.